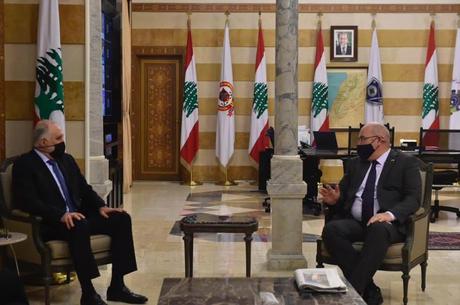 President Michel Aoun on Tuesday met at Baabda Palace with the representative of the United Nations High Commissioner for Refugees in Lebanon, Ayaki Ito, with talks touching on displaced Syrians residing in Lebanon, the National News Agency reported on Tuesday.

“Lebanon hosts the largest number of Syrian refugees on its soil compared to its population and small area,” said Aoun to his visitor.

He added saying that Lebanon “has reached a stage of exhaustion as a result of the repercussions of this displacement.”

Lebanon, a crisis-wracked nation, says it hosts 1.5 million Syrians -- nearly a million of whom are registered as refugees with the United Nations.

Nine out of ten Syrians in Lebanon live in extreme poverty, the U.N. says.

Lebanese authorities have pressured Syrians to return even though rights groups warn that Syria is not yet safe.

Really? So why don't they go back home?
The idiot Mystic told us that the war was over and that Syria was safe now...

He’s pinning the bankruptcies on the poor refugees. Meaning they stole $300 billion over the years and created the $100 billion debt. Yeah right. He may be able to fool his low IQ sheep but it doesn’t work on the average Lebanese.

Who’s smuggling our subsidized food, medicine and gas to Syria, Africa and even Europe, is it not your partners?

So how come they’re still in Lebanon? And what about your loser son in law, has he not exasperated the situation in Lebanon? Or your phony alliance with the Party of God? What a joke.

Sa7 eh noum ya Aoun....Blame your thieves in your party and your allies