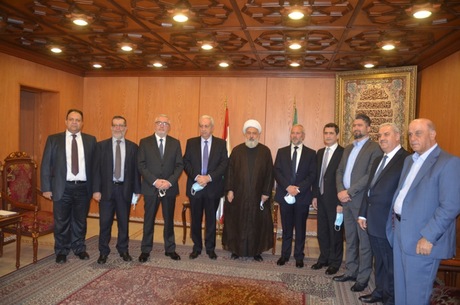 The delegation, dispatched by LF leader Samir Geagea, has met with several religious leaders in recent days to discuss the dire situations in the country.

Al-Khatib welcomed the delegation, stressing that the Council was founded by Imam Moussa al-Sadr on the basis of “love, rapprochement, cooperation and openness.”

“Imam al-Sadr was the first Muslim cleric to enter a church to lecture and pray,” Khatib added.

Emphasizing the need to “eliminate concerns among the Lebanese and build trust among everyone,” the Council’s deputy chief underlined that “the Shiite decision, with all its components, is against any civil or sectarian war.”

“We are not advocates of war, we pledge that the arms will not be used domestically and it is our religious and national duty to preserve Christians,”

“We will safeguard this special status and we will defend it, and others have to understand the concerns of southerners and the threat posed to them by the Israeli enemy,” the Shiite cleric went on to say.

“The resistance is the result of the Israeli occupation and the state’s weakness and it hinges on the elimination of the threat and the state’s ability to defend its border and people,” he explained.

Commenting on Maronite Patriarch Beshara al-Rahi’s call for Lebanon’s neutrality, al-Khatib said such a solution is not feasible amid “the daily violations of territorial, maritime and aerial sovereignty by a historic enemy.”

He also warned that Lebanon is facing an “existential threat,” urging political forces to shoulder their responsibilities and form “a national unity government comprising everyone.”

Speaking on behalf of the LF delegation, MP Antoine Habchi said “these critical times require extraordinary solidarity” among the Lebanese.

Noting that the authority of the Higher Islamic Shiite Council is respected by the Shiite community and all Lebanese, Habchi added that “since its inception, this Council has sought to preserve Lebanon’s unity, freedom and independence.”

He also said that in order for Lebanon to rise, there should be a “strong state” that monopolizes the use of “violence and arms,” which would enable it to “protect all Lebanese and protect Lebanon from any attack, be it from the Israeli enemy or any other source.”

Habchi also reminded that Imam al-Sadr had called for the “firmest cooperation with brotherly Arab countries.”

We dont need your arms to preserve Christian's.

We decided to give Lebanon a chance as a nation. If you want to keep your weapons better to divide Lebanon.

"Protected" yourself through massacring pals, kurds, fellow christians from different political sides, leftists, lebanese muslims, the military, the druze. No side was left untouched. Basically, stop acting like heroes. Your preferred side were terrorists back then and today some would love to slaughter fellow lebanese but facts are, they can't. The shia have the power today and they have shown more discipline with their weapons than the LF and their allies did during the civil war. Thank God its the shia and not LF who have the weapons. We saw what they did in the past, they and their allies. Those days are gone now. Your beloved geagea even had to accept Aoun as president. Lebanon won't be divided, the LF itself isen't calling for it to be divided. What are you, 12? Wake up and smell the coffee. If you want change, then every single political party and individual that was in the civil war must be banned.

more discipline, yet they can't help but assassinate people every now and then. they're just another mafia with guns and so many are frothing at the idea of instilling their brand of order and justice. more weapons and nobody linked to them is ever held accountable. killon ya3ne killon, but the honeymoon period with hizb is over. these murderers proved they're the same as the rest.

But people like you are only angry that your opponents got a bigger cake than you and not angry for ALL the innocent people killed on all sides and by all sides, including the one you support. That is why there will be no change as long as the same criminal parties are allowed to play a role in lebanon. You cant point fingers at hizb while supporting the LF unless you have double standards.