At Least 40 Dead in Fighting in Sudan's Darfur 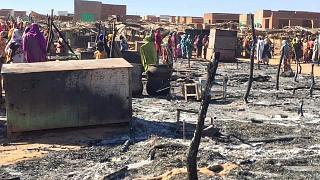 At least 40 people have been killed and 58 injured in three days of clashes in Sudan's West Darfur state, the United Nations said Monday.

"Since April 3, 40 people have been killed," the U.N. humanitarian coordination office OCHA said in a statement.

It said the clashes pitted Arab groups against the non-Arab Massalit ethnic community in El-Geneina, where the situation remained "tense."