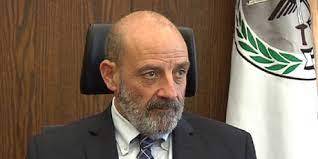 In a statement, Sarraf said he had personally requested to testify in order to unveil “important information” that he possesses regarding the case.

He added that he handed Bitar a file containing information and documents that he had collected, hoping his contribution will lead to “unveiling the facts and holding accountable those responsible for the crime and those who were negligent.”

Sarraf added that he is willing to help Judge al-Bitar in anything that he might request.

Who can trust this Syrian Lover!?
He will do all that he can in order to cover up for Ebola and the filthy Syrian Regime.
Those two were dealing with the Ammonium Nitrate to build the Syrian Barrel bombs...
Syria and Ebola are the culprits!

Im afraid he will lead the investigators on a wild goose chase..

Help me understand why this honest person showed up suddenly to this judge now after 8 months and did not help the previous judge, especially right after the outcry of people and innocent martyrs.