Bassil Yet to Travel to Paris, Hariri 'Doesn't Want to Meet Him' 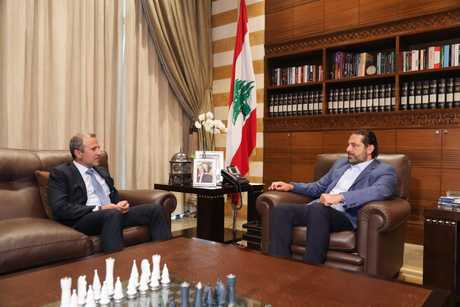 Free Patriotic Movement chief Jebran Bassi is still in Lebanon and did not travel Tuesday to Paris, contrary to the latest media reports, sources close to him said.

Bassil has however “received an invitation from the Elysee to visit Paris and his travel is hinging on a phone call to inform him of the date of a meeting whose nature is yet to be defined,” the sources told LBCI TV.

“He has not sought the meeting or the visit and he does not need a mediator with the French side, seeing as he is in constant contact with the French,” the sources added.

Sources close to PM-designate Saad Hariri meanwhile told MTV that Hariri “does not want to meet” with Bassil, seeing as the cabinet formation negotiations should be with President Michel Aoun and not with Bassil.

“Hariri is convinced that meeting Bassil in Paris will not lead to any result,” the sources added.

“Let President Aoun give up the one-third-plus-one share now and the government will be formed now,” the sources said.

There’s no way out for the French . They set the trap around themselves without any form help.... poor Macron.

I would say poor Lebanese!

The Lebanese are responsible for their own demise. Nobody forced anyone to accept voting in return of money or a job. People sold their souls! The next logic step is to overthrow those who can no longer fulfill their promises.

The Lebanese constitution is in urgent need of an amendment that bans individuals under 150 cm in height from participating in and assuming public office. This shall include but not limited to positions in Parliament, Government, and the Presidency.

neither Bassil or Hariri should be entitled to visit or comment on who goes or doesn't go..