Einstein Letters about Nazis to Be Auctioned in U.S. 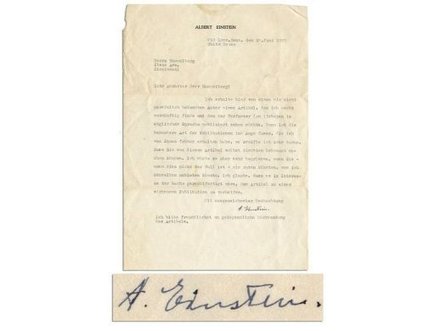 Three letters by Albert Einstein to a American-German group which campaigned against the Nazis in Germany in the 1930s will go on the auction block in Los Angeles next week.

In one, the father of relativity praises the "Friends of Truth," a Cincinnati-based German-American group, for not allowing Jews to join it because it would weaken their anti-Nazi message.

"I welcome your association and their work from the bottom of my heart," Einstein, who made his home in the United States after Adolf Hitler came to power in 1933, wrote in an August 1934 letter to group member August Hamelberg.

"Every German who has the opportunity, by living away from Germany, to be healthy and stay out of life-threatening danger, should see it as their obligation to do so.

"Your concise brochure is a masterpiece of such action, by avoiding taking political sides with a healthy sense of justice," he said, referring to four pamphlets with titles including "The Nazi Obsession: Jews and Germans."

And he said: "You're absolutely right not to accept Jews in your ranks, as it would weaken your position. For similar reasons, I have so far avoided speaking out openly about this issue."

In June 1935, he wrote "Your blessed work is all the more honorable as it isn't only an investment of your time but it asks a great measure of courage and self-reliance.

"If there were only as many like-minded Germans over there, the German community wouldn't have sunk so low!"

The letters are to be sold at auction on January 31 by LA-based auction house Nate D Sanders, which last October sold an Einstein letter commending an activist for his efforts helping European Jews for nearly $14,000.