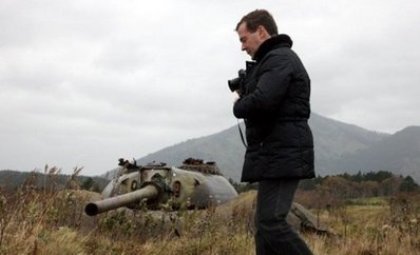 President Dmitry Medvedev Wednesday ordered the deployment of additional weaponry on the Kuril islands claimed by Japan, adding Russia needed to expand its presence on an "inseparable" part of its territory.

"The additional weapons which will be deployed there must be sufficient and modern to ensure the security of these islands which are an inseparable part of the Russian Federation," Medvedev said, quoted by Russian news agencies.

"We will make every necessary effort to strengthen our presence on the Kuril islands. This is our strategic region," he said at a meeting with Russia's ministers of defense and regional development.

His comments represented a drastic sharpening of Moscow's tone in the dispute with Tokyo after Japan's Prime Minister Naoto Kan called Medvedev's unprecedented visit to the islands in November an "unforgivable outrage".

"Ensure that all the necessary decisions are carried out, the deliveries (of weapons) are realized and all the necessary reorganizational measures are fulfilled," Medvedev told Defense Minister Anatoly Serdyukov.

Serdyukov, who also angered Japan when he made an inspection visit to the islands at the weekend, replied that the defense ministry would review what additional arms were needed on the Kurils and would report back at the end of February.

"We will prepare a program by the end of the month. Now we understand what weapons need to be there. We will take a decision by the end of month," Serdyukov was quoted as saying.

The Kurils, which lie north of Japan's Hokkaido island, have been controlled by Moscow since they were seized by Soviet troops in 1945 but their status is a major problem in Moscow-Tokyo relations.

The dispute surrounds the southernmost four islands -- known in Russian as Iturup, Shikotan, Habomai and Kunashir -- which are still claimed by Tokyo and collectively known in Japan as the Northern Territories.