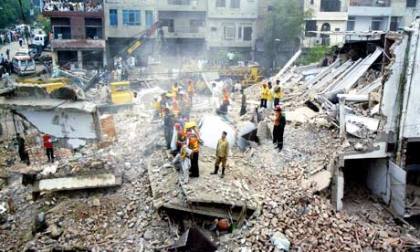 Four women and two children were killed, with dozens of others trapped under rubble when a factory collapsed in Pakistan's city of Lahore on Monday, officials said.

The three-storey building used to manufacture veterinary medicines came crashing down, probably the result of a boiler and a gas cylinder explosion at the premises in the congested Multan Road area, police said.

Rescue workers dug through the rubble with bare hands, desperate to answer trembling cries for help from people trapped beneath concrete slabs as sobbing relatives urged rescuers to do everything possible to recover their loved ones.

Police said the Orient Labs (Private) Limited factory was illegal as it was without the proper registration, and they were hunting down its three partners.

The accident at the 25-year-old factory will likely highlight poor safety procedures among Pakistani manufacturers and, with a 12-year-old boy among the dead, the use of child labor.

"Three bodies have been pulled out. Two are women and one a child. There are two other bodies of women still under the rubble," senior police official Ghulam Mehmood Dogar told Agence France Presse at the site.

Rescue workers later emerged with one of the bodies wrapped in a white sheet, and later with another body, that of a 14-year-old boy, which was put in a waiting ambulance and driven to hospital, an AFP correspondent said.

Police had also reported the death, earlier, of a 12-year-old boy.

"Eighteen people have been accounted for and 45 to 50 are still feared to be buried under the rubble," Dogar said.

An AFP photographer said he saw the hand of a motionless woman lying under the rubble. Rescue worker Mohammad Asif also put the death toll at five, saying one boy and four women had been killed.

"The workers were mostly women and children who were engaged in packing up the medicines," Asif told AFP.

"I came here rushing and weeping but luckily my son has been rescued. He is injured and alive. But my 12-year old nephew is still missing."

The main working hours were 8:00 am to 5:00 pm, but employees were quite often required to work late into the night as well, Akram said.

The rescue effort was hampered by narrow lanes and it took time for heavy cranes and excavators to reach the area.

"It's a big disaster. It is too early to say when we'll finish. We want to recover alive as many people as possible," said rescue worker Ahmed Raza.

Workers and volunteers used everything they could -- hammers, axes, chisels and shovels -- to shift the rubble and pull out the injured, coated in dust, as relatives stood by, sobbing, and a crowd of local residents gathered to watch.

One slightly injured girl pulled out of the rubble was too frightened and panicked to tell reporters and rescue workers what she remembered.

A 55-year-old housewife refusing to give her name accused the government of providing no security to taxpayers.

"There are factories working illegally in residential areas. We have lodged complaints in the past but who will listen to us?" she said in desperation.

As the afternoon wore on, workers started to assemble search lights with the help of a generator, readying for a night of painstaking work.

"The search will continue throughout the night. We have to be very careful, it is the question of human lives," he added.

A small group of about 15 to 20 workers protested at the site, carrying the red flags of Pakistan's Labor Party and shouting: "Who is accountable for the flood of these innocent workers? We want an answer."

Eight million people live in Lahore, 253 kilometers southeast of the capital Islamabad. It is considered Pakistan's cultural capital and perhaps the most liberal city in the conservative Muslim country.