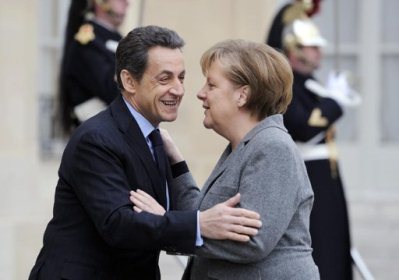 France and Germany will not accept the "blocking" of international action on Syria, French President Nicolas Sarkozy said Monday, after Russia and China vetoed a U.N. resolution on the crisis.

After a meeting with German Chancellor Angela Merkel, Sarkozy also said he would call Russian President Dmitry Medvedev on behalf of France and Germany later Monday to discuss the international community's response to the crisis.

"Germany and France will not abandon the Syrian people. What is happening is a scandal. We are not ready to accept indecision or the blocking of the international community," Sarkozy said.

"There were 200 more deaths this weekend, how long can we accept this?" Sarkozy demanded.

He said the Russian position on Syria was "stunning" considering that "in the past they have always been close to the positions of the Arab League."

Merkel also slammed the Russian veto and said Germany would support efforts to create a group of international friends of Syria.

"We are not only disappointed but appalled that the United Nations resolution was not adopted," she said.

"Russia must truly consider whether it is weighing the consequences of these decisions and whether it wants to have a policy in contradiction with the Arab League."

Russia and China on Saturday blocked a U.N. Security Council resolution proposed by Arab states condemning Syria for its crackdown on protests, drawing condemnation from other global powers and the Syrian opposition.

They lost. But more so, they lost their minds and are displaying bouts of hysteria. They should be put in straight jackets before they hurt themselves even more.