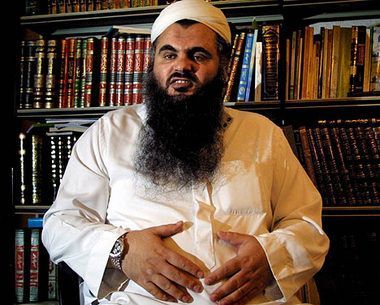 The interior ministry condemned the decision, saying the 51-year-old is "a dangerous man who we believe poses a real threat to our security and who has not changed in his views or attitude to the UK."

Britain has been trying to deport Qatada to Jordan for the past six years but its efforts were blocked last month by the European Court of Human Rights, which said evidence against him may have been obtained through torture.

Following the European ruling, Qatada applied to the Special Immigration Appeals Commission in Britain to be released from the high-security Long Lartin jail in Worcestershire, central England.

Lawyer Ed Fitzgerald told the commission that Qatada's detention for six and a half years while fighting deportation "has now gone on for too long to be reasonable or lawful".

But Keith Vaz, a lawmaker who chairs parliament's Home Affairs Select Committee, said most people would be "astonished by this decision considering Abu Qatada is wanted on terrorism charges in eight countries".

"The only way to avoid the situation occurring again is a fast-tracked system in the UK and EU courts so that those who pose a threat to the British public are deported as swiftly as possible."

Judge John Mitting ruled that Qatada should be set free under "highly prescriptive terms" for the next three months.

After that the judge indicated he may release Qatada altogether unless the government had made progress in trying to deport him.

"The time will arrive quite soon when continuing detention or deprivation of liberty could not be justified," Mitting said.

Qatada, a Jordanian of Palestinian origin who is also known as Omar Mohammed Othman, was once labeled bin Laden's right-hand man in Europe by a Spanish judge.

The father-of-five, who arrived in Britain in 1993 claiming asylum, has been in and out of prison for the past decade and has thwarted numerous attempts by the authorities in London to deport him.

The cleric has been convicted in his absence in Jordan of involvement in two attacks and Amman has repeatedly urged London to extradite him.

The European court said however that it "finds that there is a real risk that the applicant's retrial would amount to a flagrant denial of justice" -- a violation of Article 6 of the Convention on Human Rights.

Interior minister Theresa May is now seeking assurances from Jordan that evidence gained through torture would not be used against Qatada.

A spokesman for the interior ministry, known as the Home Office in Britain, added: "This is not the end of the road and we are continuing to consider our legal options in response to the European Court's ruling."

The judge said it would take "between a few days and about a week" for Britain's domestic intelligence service MI5 to check Qatada's proposed bail address, which was not revealed in court, before he could be released.

The cleric will subsequently be under a 22-hour curfew, prohibited from using the Internet or any electronic communications and he will be electronically monitored.

His visitors and movements will also be restricted.