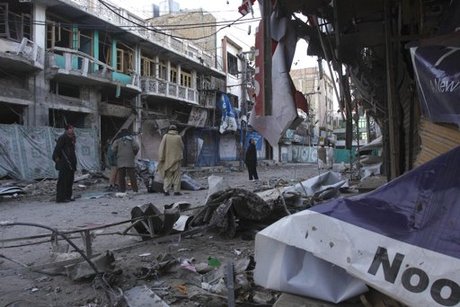 A suicide bomber attacked a market in a largely Shiite Muslim area of northwest Pakistan on Friday, killing at least 19 people and wounding 54 others in the deadliest attack for a month.

The bomb exploded near a mosque as the main Friday prayers took place in Parachinar, a flashpoint for sectarian violence between majority Sunni and minority Shiite Muslims in Pakistan's tribal badlands on the Afghan border.

Parachinar is the main town in Kurram district, part of the semi-autonomous tribal belt where U.S. drone strikes target Taliban and al-Qaida-linked militants in what Washington considers the world's largest international terror hub.

It was the deadliest attack in Pakistan since a remote-controlled bomb blast killed at least 35 people in the Khyber tribal district on January 10.

"At least 19 people were killed and 54 others were wounded when a suicide bomber on a motorcycle blew himself up in a crowded market," top regional administrator Sahibzada Mohammad Anees told Agence France Presse.

Fourteen of the wounded were in a critical condition, he added, fuelling fears that the death toll could rise further.

A splinter group that broke away from Pakistan's umbrella Taliban faction claimed responsibility for the attack.

"We sent the suicide bomber following attacks on Sunni Muslims by the Shiite tribes in the area," Fazal Saeed told AFP by telephone, claiming to be the leader of the so-called Tehreek-e-Taliban Islami.

"We caught a man yesterday who was planting a bomb at a petrol station owned by a Sunni. We did it in response," he added.

Since the late 1980s more than 4,000 people have been killed in outbreaks of sectarian violence between Sunni and Shiite militant groups in Pakistan.

Telephone links broke down after the attack and news of the elevated death toll was slow to arrive via radio, Anees said.

Officials had earlier said eight people died in the blast, which struck as locals visited a special Friday market.

"A curfew has been imposed in the area after some people tried to hold a demonstration. Security forces have sealed the area," Anees said.

According to an AFP tally, Islamist bombers and gunmen have killed more than 4,800 people across Pakistan since July 2007.

Sectarian hatred in the religion of peace!
One wonders who is inciting these outrageous events? What is this over 1300 years old indelible offense that keeps generating much misery?
Only muslims can fix Islam before nuclear weapons destroy everybody.

Before you attack Islam, you make sound like Christians never done it. Even in your Lebanon, Christians would kill each other if they had the chance.