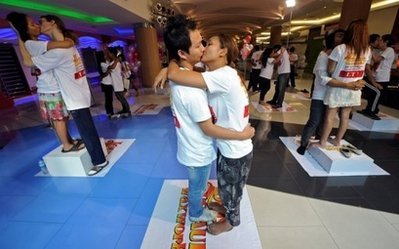 Seven amorous but exhausted couples smooched their way to a new world record in Thailand on Monday with the longest continuous kiss lasting more than 32 hours -- and kept going.

The contestants broke the previous world record of 32 hours seven minutes and 14 seconds set in Germany and were vying to become the last ones locking lips for a prize of about $3,250 cash and a diamond ring, organizers said.

"I am glad we could set a new record," said Somporn Naksuetrong, general manager of the Louis Tussaud’s Waxworks in the resort of Pattaya which hosted the Valentine's Day event.

"But at the same time I'm worried for our contestants. They looked really tired. We've already prepare medical services ready for them."

He said he was particularly concerned about one 51-year-old woman and her 37-year-old husband.

"The wife is weary but not giving up. She is exhausted but she wrote a note to us saying they will be the last couple. I think they will stay until they collapse," Somporn said.

Fourteen couples joined the contest, kissing their way through the night without stopping even when sipping liquids through straws or going to the toilet with their partner.

They were forbidden from sitting down -- except when going to the toilet -- or falling asleep. Seven dropped out before reaching the new record.