Army Chief: Israel Will Make Own Decision on Iran 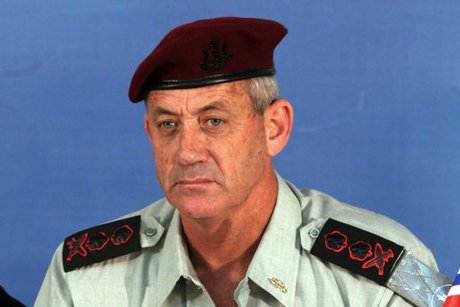 Israel will ultimately decree on an Iranian strike on its own, its military chief of staff said in an interview broadcast Saturday, as a senior U.S. official arrived for talks on the Islamic Republic.

"Israel is the central guarantor of its own security; this is our role as army, the State of Israel should defend itself," Lieutenant General Benny Gantz told state-owned Channel One TV.

"We must follow the developments in Iran and its nuclear project, but in a very broad manner, taking into account what the world is doing, what Iran decided, what we will do or not do," he said.

In recent weeks, there has been feverish speculation that Israel was getting closer to mounting a pre-emptive strike on Iran's nuclear program, though Israel has denied reaching such a decision.

Tensions between Iran and Israel have been simmering with Iranian warships entering the Mediterranean through the Suez Canal in a show of "might", a move Israel said it would closely monitor.

On Wednesday, Iran said it had installed another 3,000 centrifuges to increase its uranium enrichment abilities and was stepping up exploration and processing of uranium yellowcake.

U.S. National Security Advisor Tom Donilon will on Sunday begin talks with Israeli officials on a range of issues including Iran, two weeks ahead of a Washington visit by Israeli Prime Minister Benjamin Netanyahu for White House talks with U.S. President Barak Obama on the same topic.

According to Gantz, whose interview was conducted prior to the Saturday developments, Iran was not only an "Israeli problem", but also "a world and regional problem".

On Saturday, Israeli Defense Minister Ehud Barak called on the world to tighten sanctions on Iran before the country enters a "zone of immunity" against a physical attack to stop its nuclear program

Iran has been slapped with four sets of U.N. sanctions and a raft of unilateral U.S. and European Union measures over its nuclear drive, which Tehran maintains is peaceful but which much of the international community suspects masks a weapons program.

You are the problem. Everybody is paying the price for your existence. Now you make the decision, and drag everyone with you. Peace will never be, as long you keep racking up hatred and fear. I guess you are planning an all out war. What the hell, a lot of cheap real estate you can add to your small country. Maybe you should nuke the whole area, so you can live by yourselves in peace. What a joke. Go clean you cluster bombs you left in Lebanon. Nothing is prohibited for Israel.

Two true lebanese people didn't like my comments so far. Because they know one Israeli life is worth billion of Lebanese lives. What a bunch of low lives. How can my comment offend you?

You are the problem. Everybody is paying the price for your existence. Now you make the decision, and drag everyone with you. Peace will never be, as long you keep racking up hatred and fear. I guess you are planning an all out war. What the hell, a lot of cheap real estate you can add to your small country. Maybe you should nuke the whole area, so you can live by yourselves in peace. What a joke. Go clean you cluster bombs you left in Lebanon. Nothing is prohibited for Israel.

To the comments above: Do you guys honestly believe what comes out of your own mouth? or a tape recorder always on replay?

Dear Anthony. First I am not affiliated to any of your farms or camps in Lebanon. I have better vision of things there, since I am not hysterical or emotional about any of your leaders. Your leaders are nothing but shepherds.

what is the difference between Israel, Iranian regime, Syrian regime and Hizballah? they all aggressors and they know only one language, the language of war. Let's also stop boosting about us winning the war agianst the Israeli army in 2006. I don't think the killing of over 1000 innocent Lebanese is winning!stop taking sides when all the sides are at the wrong, and promote what is right for Lebanon.

Israel can do whatever it likes because it controls the united states.
If israel really wanted to win the 2006 "war" it would have done it.

Lebanese dont be stupid about israeli military superiority, they are the strongest (Because they are the best equipped).

Of corse the Lebanese Army is the best - but they have no weapons.

If israel wants to declare Lebanon a state of Israel then it will win, as it will become a gurrila war for Israel in Lebanon, but if Israel decides to just attack Lebanon then it will loose.

The key question is does Israel want to turn Lebanon into its own mini state ?

With all due respect Israel is defending itself against Iran and it's proxies,and I know also that you guys think Israel controls the US because you can't take it that the US is an ally and thinks for itself....As for the Lebanese army it is not at war with Israel fortunatly and if it will come to war every body will loose ,that's the lesson of 2006 .

go and get the iranian bastards and jabal amel and his familia too, start with hassouni's turban

Israel and Iran both need to sit down on one table and agree on a peace plan, let's face it and be real Iran cannot erase Israel(Backed by the US) and vice versa.
As long as the two are showing off their muscles, we will not see a real peace. In 2006,If Israel decided for the sake of 2 kidnapped soldiers to destroy the south and Lebanon they would have done it, but this large scale of a war exercise was not planned which is why they lost a lot of casualties and etc.. for those 2 kidnapped soldiers. It is to remember that the US supports Israel existence so erasing it from the map is too late at this point. Realistically and to live in peace you need to sit down and agree on the mutual relations, otherwise innocent people will always pay the price.

We as Lebanese are fed up being being the battleground for others to solve their problems. 1974-1990 16 years US-Soviet cold war battleground. Now Iran-Israel battleground. When we Lebanese will grow up. Let them all go to Hell. We are not interested in their conflict. Let them make war in their own countries. All those who who ruined our beautiful country May rot in Hell. All those who threw bombs on our land may rot in Hell. They are all together not worth the toenail of the mason who put a piece of stone to build my country.

@ flamethrower let's make this clear once & for all your beloved Hizzbollah did not win the war in 2006, at war the attackers always pay heavy damage on the ground. how many people died that month? you can deny saying that they were civilians. you can convince that to your brainwashed public. out of all these civilians at least 30% were hezzi's.

but you guys say they are civilians they were not. besides how man billions of $$$$ of losses Lebanon suffered? Israel pulled out because Hezzis were attackinng & bombing from residential areas & you guys were crying that innocent people are dying so again international community intervened & Israel pulled out.

recently hezzbollah members got killed in Syria, you keep it as a secret, out of all those hezzi's that died in 2006 you kept it secret by paying off their family to shut their mouth using Iran's money.

at the End Israel was not defeated it was our beloved country who was defeated.