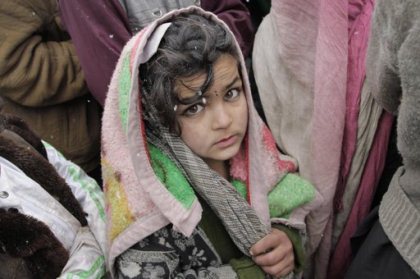 A harsh winter has killed almost 40 children in Afghanistan in the past month, most of them in refugee camps in Kabul with aid groups warning Sunday of more deaths as temperatures keep falling.

Twenty-four children lost their lives in camps on the outskirts of the capital which houses thousands of Afghans fleeing war and Taliban intimidation in southern Afghanistan.

"Over this past one month we have 40 deaths recorded. All have died from cold and are mostly children," he said.

Afghanistan, a landlocked and mountainous country, has suffered its coldest winter in 15 years.

International children's charity Save the Children warned on Sunday that weather conditions were expected to worsen, threatening the lives of more children in the camps.

"Save the Children is warning that even more could die from cold in what is Afghanistan's worst winter for 15 years," the charity group said in a statement, adding that temperatures were expected to drop as low as -17 degrees centigrade.

"This has been a brutal winter and children have little to protect them from the biting cold," Bob Grabman, Save the Children's country director in Afghanistan, said.

"Many are trying to survive without decent shelter or blankets, without fuel, food, warm clothes or shoes," he added.

"At night the temperature falls dangerously low, threatening the lives of newborns and small children. It’s crucial we get urgent help to families so children are protected," Grabman added.

According to the charity about 20,000 people, fleeing insecurity caused by a Taliban-led insurgency, are living in more than 30 informal settlements in Kabul under extreme hardship. Most live in flimsy tents.

Despite the flood of billions of dollars in aid from the international community after the collapse of the Taliban Afghanistan remains among the poorest nations in the world.