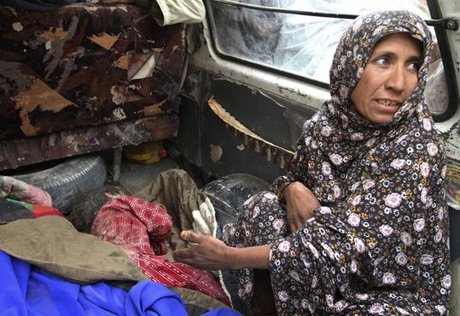 The Taliban on Monday vowed revenge for a U.S. soldier's killing spree of 16 villagers in Afghanistan that has sparked a new crisis in already fragile Afghan-American relations.

The U..S soldier walked off his base, heavily armed and with night vision equipment, and broke into three village homes before dawn Sunday, killing 16 people including women and children, according to Western and Afghan sources.

Some bodies bore blackened burn marks, according to an Agence France Presse correspondent who saw them at the villages in the southern province of Kandahar.

It is the latest in a series of actions by American troops that has provoked outrage in Afghanistan, and comes weeks after the burning of Korans at a U.S. base provoked riots that killed 40 people and plunged ties to an all-time low.

The Taliban, leading a 10-year insurgency against U.S.-led foreign troops and the government in Kabul, threatened to take revenge against "sick-minded American savages ... for every single martyr.”

The statement on their website came after the U.S. embassy urged its citizens to take extra precautions, warning against "a risk of anti-American feelings and protests in coming days especially in eastern and southern provinces.”

A soldier has been detained and the United States has offered condolences to the families and pledged that action will be taken against anyone found guilty.

President Barack Obama telephoned Afghan President Hamid Karzai to promise a speedy investigation into the "shocking" killings, which fanned already smoldering anger among Afghans over the burning of the Korans.

Sunday's massacre poses an acute test of the U.S.-Afghan alliance, as the two countries pursue difficult talks on securing a strategic pact to govern their partnership once foreign combat troops leave Afghanistan in 2014.

The proposed strategic pact would likely cover the legal status of any U.S. troops remaining in Afghanistan to help Kabul with intelligence, air power and logistics in the fight against Taliban insurgents.

In Iraq, Washington abandoned its pursuit of a strategic partnership deal and pulled out all its combat troops, leaving no residual force, after failing to get Baghdad to grant its soldiers legal immunity.

A survey by ABC News and The Washington Post says that 60 percent of Americans now believe the Afghan war is not worth its costs and that 54 percent want to pull out U.S. troops even if the Afghan army is not adequately trained.

Karzai reacted with anger to what he called the deliberate and unforgivable killings in Kandahar, the province where the Taliban were created.

"When Afghan people are killed deliberately by U.S. forces, this action is murder and terror and an unforgivable action," he said.

He spoke by telephone with the families of those killed, including Rafihullah, a 15-year-old boy wounded in the leg who told the president the soldier had torn the dresses of the women in the house and insulted them.

"He came to my uncle's home, he was running after women, he was tearing their dresses, insulting them," Rafihullah said on an audiotape of the conversation heard by AFP.

The Taliban wasted no time in trying to capitalize on the killings, sending fighters to mosques in Kandahar's Panjwayi district as the funerals of the victims of the shootings took place, urging villagers to rise up.

"They were telling the people: 'The invading infidel Americans come to your homes, insult your women and kill your children, what are you waiting for? You should come out and demonstrate'," local resident Abdul Khaliq told AFP.

Kandahar is a stronghold of the Taliban fighting to oust Karzai's government, which is supported by some 130,000 U.S.-led NATO troops.

"A large number from amongst the victims are innocent children, women and the elderly, martyred by the American barbarians who mercilessly robbed them of their precious lives," the Taliban said.

In November, the ringleader of a rogue American military "kill team" charged with murder for shooting civilians for sport was found guilty and sentenced to life in prison by a military panel.

But observers say the vast majority of civilian deaths in the Afghan war are caused by the Taliban. A total of 3,021 civilians died in the war last year, according to a U.N. report, which blamed 77 percent of the deaths on the militia.

Makes you wonder, who is calling who a terrorist?

amazing how Taliban is vowing revenge for the death of civilians while they have been killing hundreds even before the US invasion...

amazing how Taliban is vowing revenge for the death of civilians while they have been killing hundreds even before the US invasion...

For the fools who keep repeating idiotic statements, the acts of this soldier are neither inspired nor condoned by the US military morals. This soldier will be prosecuted and punished unlike the Taliban who kills innocent civilians and is praised as doing the "Jihad for Allah".

For the fools who keep repeating idiotic statements, the acts of this soldier are neither inspired nor condoned by the US military morals. This soldier will be prosecuted and punished unlike the Taliban who kills innocent civilians and is praised as doing the "Jihad for Allah".