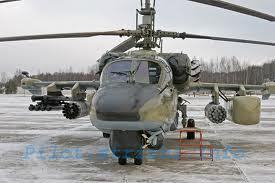 One of Russia's most modern military helicopters has crashed during a training exercise, killing its two-man crew, official said Tuesday.

The Ka-52 Alligator two-seater, which entered serial production in 2008, went down in the central Tver region on Monday evening, the local investigative committee said in a statement.

One pilot was killed at the crash site while the other died of his injuries in a regional hospital on Tuesday, the defense ministry said.

Although Russia's underfunded military frequently loses aircraft during training, often with fatal consequences, it was the first time that a Ka-52 had crashed, Interfax quoted military expert Yevgeny Matveyev as saying.

Russia's president-elect Vladimir Putin has promised to spend about 23 trillion rubles ($780 billion) by 2020 on the modernization of the country's Soviet-era military force.

Seriously, they called the thing Alligator. Great name for a small Tank or even a Submarine but not a Helicopter, hell why not the Hippo! I mean when was the last time you've seen an Alligator fly (an elephant maybe but not a croc), of course it's gonna crash.