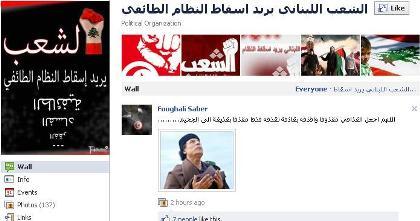 Protests sweeping the Middle East have given new impetus to Lebanese youths who have launched their own revolt on Facebook in a bid -- albeit improbable -- to bring down Lebanon's confessional system.

Using slogans popularized by protesters in Tunisia and Egypt, several pages urging the Lebanese to bring down the Mediterranean country's confessional "regime" or calling for a "day of wrath" against confessionalism, corruption and poverty have appeared recently on the social networking site.

"Lebanese youths, rise up against the oppression of this regime," writes Mahmoud al-Khatib on www.facebook.com/lebrevolution, which has attracted more than 10,000 friends.

But observers and those behind the initiative say they are well aware that changing the system, in which most government and other posts are attributed according to religion rather than merit, will be a hard-won battle.

"The Lebanese are always boasting about their freedom and democracy as compared to other Arab countries," said Hassan Chouman, a 24-year-old computer analyst in favor of change.

"But Arab countries each have one dictator whereas we have at least seven or eight," he added, referring to the political leaders that rule in Lebanon and who represent the country's various Christian and Muslim communities.

Contrary to other countries in the Middle East, Lebanon's system of government is rooted in a 1943 power-sharing agreement adopted after the country won its independence from France.

Aimed at maintaining a balance between the 18 religious sects, the agreement calls for the president to be a Maronite Christian, the prime minister to be a Sunni Muslim and the speaker of parliament a Shiite Muslim.

Other government jobs are also allocated according to religious affiliation.

"In Lebanon, competence doesn't stand for much," said Ghassan al-Azzi, political science professor at Lebanese University. "The leader of each community appoints members of his clan to top posts which renders our public administration rotten."

And changing such a system is a bigger challenge than bringing down a dictator, he said.

"Here in Lebanon, if you hold street protests, it is not clear who it would target, which institution, which group. There is nothing tangible," Azzi added.

Religion plays such a major part in all aspects of Lebanese society that even secular politicians are forced to join the system if they wish to survive, he noted.

One Facebook message put it bluntly: "This movement is bound to fail unless each confession brings down its own leader," it said.

Antoine Messarra, a member of the Constitutional Council, said change will not come through a revolution in Lebanon but rather step by step, through education and better ties between the state and its citizens.

"We shouldn't settle for promises but must address the problem methodically," he said.

But for some, the current wave of upheaval in the Arab world is reason to hope that change is possible, despite deep divisions in the country pitting a pro-Western camp against a Hezbollah bloc backed by Iran and Syria.

"The lesson to be drawn from the revolutions in Egypt and Tunisia is that we must put aside all our differences in favor of a common objective," said Abu Reem, 39, administrator of the Facebook page titled "the Lebanese people want to bring down the confessional system."

He said an open meeting would be held on March 6 in Beirut to plot out the next move after his page garnered more than 10,000 admirers.

"Nothing is impossible, even if it's a long road ahead," Abu Reem said.