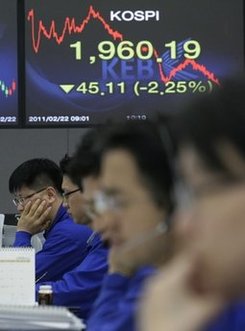 The turmoil in Libya heaped further pressure on stocks around the world Wednesday as investors worry that the global economic recovery may be derailed by the sharp rise in oil prices and swelling inflation.

Concerns that the country is descending into civil war were heightened by comments Tuesday from longtime leader Moammar Gadhafi that he would fight to his "last drop of blood," while urging supporters to strike back against protesters to defend his embattled regime.

The rhetoric, alongside mounting evidence of bloodshed around the country, got investors fretting over how the crisis will end and what the impact on the North African country's oil production will be.

Libya is the world's 18th largest oil producer, pumping out around 1.8 million barrels a day, or a little under 2 percent of global daily output. The OPEC country also sits atop the biggest oil reserves in the whole of Africa.

As a result, oil prices have risen even further following Tuesday's surge higher.

"Soaring energy prices are a clear consequence of events in Libya and the surrounding countries so this is also going to start sapping economic confidence," said Ben Potter, research analyst at IG Markets.

On Tuesday, the Dow slid 1.4 percent while the S&P fell 2 percent.

Elsewhere, the main point of interest was the release of the minutes to the last meeting of the Bank of England's rate-setting meeting. They showed another three-way split, but with Spencer Dale joining the camp of those wanting to raise the benchmark rate from the current record low of 0.5 percent.

That means only two more of the nine-member panel have to swing behind calls for an interest rate rise for borrowing costs to increase.

"This reinforces market expectations of a rate hike by the middle of this year and possibly by as early as May," said Michael Hewson, market analyst at CMC Markets.

The release of the minutes gave the British pound a limited bounce as the details of the vote had been widely anticipated.

Elsewhere in the currency markets, the euro was trading 0.1 percent higher on the day, supported by figures showing that industrial orders in the 16 countries that were using the euro in December unexpectedly spiked by a monthly rate of 2.1 percent. The expectation in the market was that orders would fall by a 0.9 percent monthly rate.

New Zealand's main stock index rose 0.4 percent to 3,372.07 after falling the day before when a powerful earthquake devastated the city of Christchurch. Prime Minister John Key declared a state of national emergency and said 75 people were confirmed to have been killed in what was one of the country's worst natural disasters.

In mainland China, shares edged higher as investors snapped up bargains following a sell-off the day before. The benchmark Shanghai Composite Index edged up 0.3 percent to 2,862.63 while the Shenzhen Composite Index rose 0.9 percent to 1,273.92. Shares in paper processing, biotechnology and information technology led the gains.