Aoun: Those Criticizing Army are Linked to ‘Takfiri’ Network 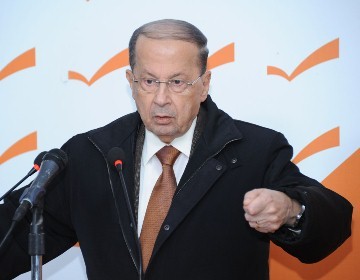 Free Patriotic Movement leader MP Michel Aoun noted on Tuesday that whoever is not linked to the recently-discovered “takfiri” network would not criticized the army.

He therefore said after the Change and Reform bloc’s weekly meeting: “Those criticizing the army are linked to the network.”

The MP made his remarks in reference to Mustaqbal bloc MP Khaled al-Daher’s statements on Monday in which he refused to “jump to conclusions” in the investigations into the extremist cell.

A “takfiri” network which was planning on carrying out attacks against various army targets was discovered last week.

Fatah leader in Lebanon Mounir al-Muqdah revealed that the leader of the network is residing in the Ain el-Hilweh Palestinian refugee camp, but his exact location is unknown.

Addressing the energy crisis in Lebanon, Aoun said: “Stalling in the case of acquiring power-generating vessels demonstrates that some sides have secret agendas in this matter.”

“Our patience in this issue is starting to run out,” warned the FPM leader.

A ministerial committee meeting on Monday failed to reach an agreement over acquiring power-generating ships, with Energy Minister Jebran Bassil saying that he “does not know what Premier Najiib Miqati wants from this affair.”

Turning to the spoiled food crisis in Lebanon, Aoun asked the Economy Ministry: “Where is the consumer protection directorate?”

Several quantities of spoiled food products have been found throughout Lebanon in recent weeks, raising questions over consumer protection, how these products made it to the country, and whether they were spoiled when they were imported.

it's time to shut him out , and for good.

Not again.I'm Starting to dislike Tuesdays.

That's it??? He's running dry! But the best is definitely that he manages to mix the failed attempt against the army, the energy crisis and... the spoiled food. And of course what is the common trait in all that? It is not their fault!!! It is "the other camp"!!! I swear, Aoun is the new Jumblat, just meaner.

“Our patience in this issue is starting to run out” .. time to officially use this as your middle name

Aoun, HEADS UP, an attack against the army DID happen: remember the lebanese helicopter that was shot down and sameer hana that was killed?? i did not hear you bark back then about seyade and all the rest of your bullshit, you were actually criticizing the army back then..و الله يلي بيسمعك بيكفر فيك و بلي خلقك

Hizbollah is the one and only enemy of the army, the people and the country... Syria is a close second these days... followed by Iran... and take this info to the bank you non-mowaten...

Yes I am sure his parents agree with you...pathetic...who authorized the person that shot it down to have a weapon? was he certified to carry one? did he have training in the army?

Of course we do not trust this army.how can you trust an army who stood watching when hizbullahs thugs invaded beirut?
Trust an army whi never defended lebanon against syrian agressions?
The army who will send a whole brigade if 2 14 years old boys had a fight in Ain el remeneh whilw laid back watching hizbullah thugs closing roads,kidnapping ppl,excuting samer hanna,dealing with drugs etc etc
This is not an army,this is a joke.

this clown has really lost it or what!!- god rid the lebanese from this idiot- but then his son in law will take over - garbage in garbage out no matter how you slice it

FPM and the Hezz are running the show in Lebanon, and are a laughing stock in Lebanon and the region.

What is he even talking about?? Plus it was the Hezz involved with this takfiri network.

Is Aoun implying here that Mustaqbal bloc MP Khaled al-Daher is linked to the “takfiri” network? this is a serious accusation. Is there any evidence to substantiate this claim?

Of course they are, they all are, if you know what I mean.

This nut head is really insane. He himself was against the army at all times. This guy is really nuts. What amazes me though is how some part of the Christian community support him. Something is really wrong with the Christians. This man vacilates every day and never reliable. Once he's with the syrian and the other against them and once against the Huzbullah and another with them. He should tell us why does he change constantly - certainly to fill his pockets with the filthy money he's claiming to be attacking.

ru refering to Rafic Harriri who was Syria Nbr 1 man and who handed them the Beirut keys and then when UN1559 (thanks to FPM) was promulgated, thought it was time to change sides?

Mowaten, the army hasn't held a grudge!?! What about his family his mom and dad his friends?? He died because of this dumb armed gang operating in our country! Use your non washed brain.

Not even in combat they die daily

friendly fire is defined as the same army or group mistakenly killing one of their own. HA is NOT the army, and the army is NOT HA. so it cannot be defined as friendly fire. It is what it is and that is the cold blooded murder of an army personnel doing his job. So stop defending this. His parents have full right to think that HA in general and the person who killed him in particular, are a bunch of crazed, power hungry, egotistical, and self centered pieces of cow dung.

the difference is that it was by accident (and the guy was surrenderd) not in an organized and intentional way like with Fath el Islam AKA Mustaqbal armed section, nor like the last takfiri network the Mustaqbal are defending

Damn, time flies.... Time for the weekly incongruities! Sit back and relax and enjoy the show LOL!

Might I remind you that he was leading the Lebanese army and that it was the LF using Rafic Harriri money that attacked the military. Remember the officers thrown in the Jounieh bay by the LF militia?

you truly are an idiot. Rafic Hariri paid the LF to attack the army? and of coarse all the documents, receipts and bank statements are with you and you are waiting for the right time to reveal them? Geagea offered to ally with Aoun against the Syrians but Aoun wanted to hold all the cards and thought his ca hones were bigger than they actually are. so in the end we all know the fastest way to run away from problems.. leave all your supporters AND your family to the mercy of animals. Yes!! what a MAN!

This is the new war: Harriri attacks the LEBANESE Army GMA defends it, Geagea attacks the Pope the Patriarch and Aoun defend them. I guess never a war led by GMA was of more critical issue, two major entities are involved: Lebanon and Christianity, and again it’s up to the FPM to defend both

Mouahahahaha. I do hope you don't beleive what you just typed. If you do, you should consult a proffessional for a deep therapy!

BTW I have just noticed that no M14 (exept mowaten) read the article, they just read the headline and started the insults. I guess this is why they are still M14 :)

"Insults are the arguments employed by those who are in the wrong." Jean Jacques Rousseau (1712-1778)

Kesrwaneh, aoun is not a defender of christians, rather he is a coward that uses the same argument just changes posiition every few years depends on who is back him. At least LF were always against syrian OR palestinian occupation. Whiel Aoun is. Typical flip flopper whos positionz cannot be taken seriously. I felel sorry for blind sheep that follow this fool

Actually I don't mind Aoun, he's just another power hungry war criminal like the others looking for away to secure his family's future by lying and robbing. And he wears a tie. What puzzles me are his followers.

This question is addressed to me as a Kesrweneh so here it goes:
1- 2007 full renovation of the Zouk-Ouyoun El Siman road (about 35km)
2- 3 waste water recycling plants inKfardebian, Feytroun and Jeita this project has been adopted in 2011 and will start in 2013 (100 Million Euros) it will take care of all the sewers problem for the upper and mid Kesrwen.
3- New electrical station for Achkout to enhance power supply of upper Kesrwen (due in summer 2012)

4- Full renovation of more than 25km of roads in villages such as Kfardebian, Hrajel, Feytroun…
5- The opening of the Bouar public hospital thanks to the minister of health an ally in the Amal movement
6- Distribution of more than 10,000 fruit trees (apples, cherries…) to Kesrwen farmers.
7- Distribution of more than 1 billion L.L. in agricultural aids to Kesrwen farmers
8- And last but not least the transformation of Zouk power plant form Diesel to natural gaz thus reducing pollution by 60% (the project will start as soon as PM Miqati release the promised funds)
Those are of course some of the main projects that were made by FPM and allies for Kesrwen development , and hopefully when we win the 2013 elections we will have 4 more years

And regarding GMA being elected in Kesrwen, well as u know Kesrwen people are very hospitable, so just like we have Geagea and Zahra living here, while they are from the north, we have GMA elected twice in a 5-0 score (remember that this is a democratic process and you can’t accuse 54% of Kesrwen of being wrong while you are right) also you have to agree that FPMis the n1 Christian power as it gained alone 54% of Kesrwen votes against 46% for all the others (El Bon, Khazen, Bouiez, Patriarch Sfeir, Michel Sleiman, LF, KAtaeb, Ahrar, Ketleh…)

Aoun making empty charges with no proof, but everyone knows he is openly allied with assassins and those that attacked Beirut on the streets in the name of resistance.

Kserwane and analysis.
and how many wars has been won by your GMA?
chupame la polla capullo.

Lucky he has the likes of you to defend his insanity

Ok I didn't get the Spanish stuff, but if by wars you mean the one against the Syrian occupation then only one, the one that ended by kicking the occupation army out. If by war you mean the war against hatred then when he made peace with the Syrians after they left the country (unlike some of their best friends during the occupation and who became their enemies only after they left) is Nbr 2. And of course if you mean political war, just remember he is leading now the biggest cabinet coalition with 10 ministers, and yes he can’t do everything he wanted but he is doing a lot nevertheless so it’s only 3, but major ones.

you're pathetic at twisting facts, here is what you believe in:
1. the syrian people are butchering the poor regime.
2. the 7th president of lebanon is one of nasrlah's children
3. sameer hana committed suicide, teslamli ya friendly fire inta lol.