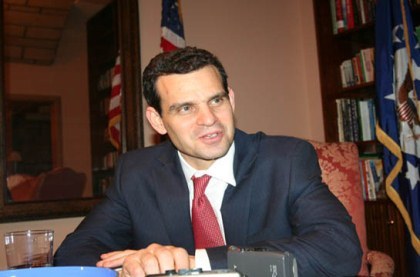 U.S. Treasury Undersecretary for Terrorism and Financial Intelligence David Cohen said he warned Lebanese officials against allowing Syria or Iran to use their country to evade international sanctions.

In remarks published in An Nahar daily on Wednesday, Cohen said the essential message that he delivered to the officials is that they should take the utmost precaution and be sure that Lebanon would not slide towards permitting Syria or Iran to use it in an attempt to evade the sanctions.

The U.S. official hinted that his visit’s main objective is to increase the international stranglehold on the Iranian and Syrian regimes but stressed that he does not seek to pressure Lebanon specifically or its financial sector.

When asked about reports that his trip to Lebanon was also aimed at targeting Hizbullah, Cohen refused to reply saying it was the first time that he visited Beirut and that several other Treasury officials had come to Lebanon to follow-up financial issues.

On whether he thought that Lebanese banks were helping the Syrian regime evade the sanctions through money smuggling, the official said: “We feel that the Assad regime is seeking to evade the sanctions. What we want from Lebanon and what we discussed with authorities here is that it shouldn’t be a gate for Syria’s evasion.”

Asked if Lebanon could witness a new crisis similar to what happened with the Lebanese-Canadian Bank, Cohen said: “I didn’t come here to speak about a specific situation. That’s not the aim of my visit.”

The Lebanese subsidiary of Societe Generale (SGBL) acquired the assets of the LCB in September last year after the Treasury Department accused it of laundering hundreds of millions of dollars on behalf of a drug lord with alleged links to Hizbullah.

The U.S. embassy said Tuesday that Cohen stressed in his meetings the need for Lebanon to ensure a transparent and well-regulated financial sector.

"He also stressed the need for authorities to protect the Lebanese financial sector from potential attempts to evade U.S. and international financial sanctions," said the statement.

"He reiterated the U.S. view that it is important to ensure that the current instability in Syria does not undermine the Lebanese financial sector."

Cohen traveled to Dubai on Wednesday.