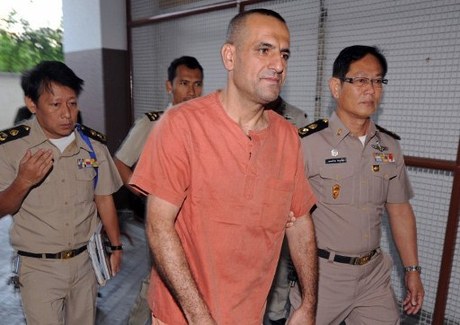 A Lebanese man arrested two months ago in Thailand on Wednesday pleaded not guilty to charges of breaking weapons control laws, his lawyer said.

Atris Hussein was arrested in Bangkok in January and police later found a large amount of chemicals that can be used to make a bomb at an address he rented.

According to the charges, Hussein and some unidentified accomplices had packed more than six tons of ammonium nitrate into bags.

"He pleaded not guilty on this charge," said lawyer Withaya Buranasil, who met his client for the first time on Wednesday before his appearance at a Bangkok court.

Hussein will next appear for a pre-trial hearing in May, Withaya said, adding that he did not plan to seek bail at present.

Ammonium nitrate is commonly used in agriculture, but mixed with other substances can make a bomb and possession of the chemical requires a permit in Thailand.

Prior to his arrest, the United States had warned of a "serious" threat of a terrorist attack on tourist areas in Bangkok.

The country has been further shaken by a string of botched blasts in the capital on February 14 in an alleged plot to kill Israeli diplomats.

Thai police are holding two Iranians, one of whom was badly hurt as he hurled a bomb at police while fleeing.

Another suspect was detained in Malaysia, while arrest warrants have been issued for two more Iranians believed to have left the country.

Israel has blamed Iran over the Bangkok blasts, as well as attacks on Israeli embassy staff in India and Georgia a day earlier.

Another filthy Hezbollah terrorist on the Persian payroll

For once you are right.

He's not guilty. he wanted to open a farm to sell biooooommmmmmmmm products :)

that batard is giving a negative image of Lebanon, again!

Funny but inappropriate...it gives them ammunition to label us all sort of things. Let's rise above the mayhem shall we? We're better people than that.

Which LF mowaten? the thugs of 30 years ago or the decent people of today? Your hzb el kzb & terror is the thugs of today, not LF!

no comments from mouwateh and flim flam thrower?????

Easy, you made your point. Everyone is innocent until proven guilty even hzb el kzb & terror party members.

so till now the only verdict, was issued bu the 14March people, coz the Thai courts are still looking into it:Typical

Well none of us really know right?

It could very well be someone sent by Hizbullah (out of its usual playing area in S. Leb) or could be sent by the U.S/Israel to make the front page.... We really don't know.

Slash, where are you? We miss your posts!