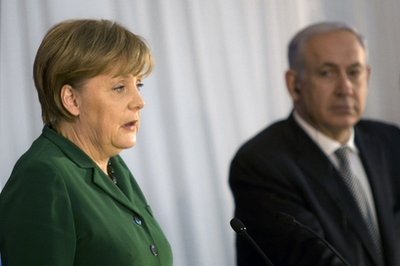 "How dare you?" Merkel told Netanyahu, according to the newspaper.

"You are the one who disappointed us. You haven't made a single step to advance peace."

Haaretz said Netanyahu tried to placate the German leader by pledging that he planned to launch a new peace plan "in two to three weeks."

A spokesman for Netanyahu's office declined to offer comment on the story.

He added that Merkel had frequently and publicly criticized the stalemate in the Middle East Peace Process -- including during a recent trip to Israel -- and that this topic had been a "significant" part of the conversation.

Haaretz said sources in Netanyahu's office confirmed he was looking for a way to "jumpstart" the peace process, but other sources said the Israeli leader would not offer any peace plan outside of new talks with the Palestinians.

The newspaper said Netanyahu was considering offering an interim peace deal that would establish a state on around 50 percent of the West Bank, a proposal supported by Israel's ultra-nationalist Foreign Minister Avigdor Lieberman.

The Palestinians have said they will not accept any deal that gives them only temporary statehood and want a negotiated agreement that tackles issues including the right of return of Palestinian refugees and Jerusalem.

In September 2010, Israel and the Palestinians met for their first direct talks in nearly two years. But the negotiations quickly ground to a halt when a 10-month Israeli moratorium on settlement construction expired.

Netanyahu declined to renew the building ban and the Palestinians say they will not negotiate while Israel builds on land they want for their future state.

A Palestinian-drafted Security Council resolution condemning the continued settlement construction, which garnered support from 14 of the council's 15 members, was vetoed by the United States earlier this month.