March 14 Becomes Opposition on Sunday: We Don’t See Anything New in Miqati’s Positions 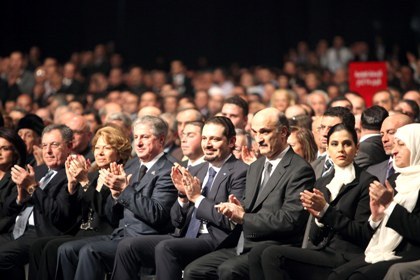 The 60 March 14 coalition MPs are preparing to hold a meeting at the Bristol Hotel on Sunday at 6:00 pm where they are expected to announce the camp’s final position on the participation in Prime Minister-designate Najib Miqati’s government.

The daily An Nahar reported on Saturday that the MPs’ statement will confirm the camp’s refusal to participate in Miqati’s government “because he failed to grant it guarantees it had requested, as well as the blocking minority.”

The MPs are also expected to condemn the way President Michel Suleiman and PM-designate Miqati are being treated by the March 8 camp.

Caretaker Prime Minister Saad Hariri is expected to hold an important speech after the meeting, but a date has not been set for it.

Another meeting following the Bristol gathering will be held in order to outline the components of the new opposition, which will be comprised of parties, movements, and individuals.

March 14 General Secretariat Coordinator Fares Soaid told As Safir in remarks published on Saturday that the March 14 leadership will hold a meeting on March 6 also at the Bristol Hotel to announce a political document and roadmap that the forces will adopt.

Meanwhile, a March 14 source told An Nahar that the camp did not sense any new position in Miqati’s recent statements in Tripoli, “but he repeated the same wooden statements on justice and the truth while the March 8 camp is preparing a ministerial statement devoid of any reference to the Special Tribunal for Lebanon and the arms possession outside the state.”