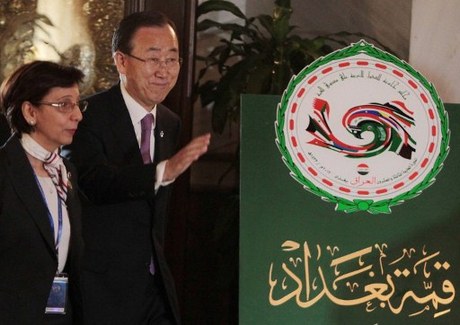 "I urge President al-Assad to put commitments into immediate effect. There is no time to waste," Ban told a news conference in Kuwait.

Ban expressed concern at the continued bloodshed in Syria but welcomed the Damascus regimes' acceptance of the six-point plan put forward by the U.N. and Arab League special envoy Kofi Annan.

"This is an important initial step that could bring an end to the bloodshed and violence," he said.

Ban said that he will "meet key (Arab) leaders in Baghdad to discuss how the U.N. and Arab League states can work together in helping the joint special envoy's diplomatic efforts to get the six-point proposal implemented."

Annan said on Tuesday that the government of Assad had accepted his plan, a move cautiously welcomed by Western nations.

Annan's plan calls for a commitment to stop all armed violence, a daily two-hour humanitarian ceasefire and media access to all areas affected by the fighting in Syria, which has killed almost 10,000 people, monitors say.

The plan also calls for an inclusive Syrian-led political process, a right to demonstrate, and the release of people detained arbitrarily.

The proposal -- put to Assad by Annan during his visit to Damascus on March 10 and 11 -- was endorsed by the U.N. Security Council on March 21.