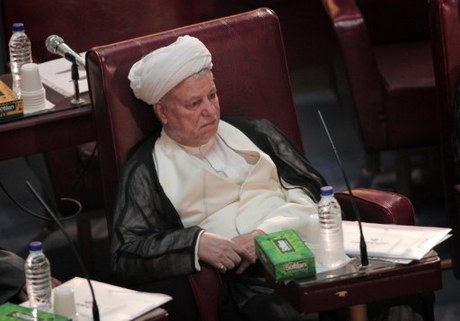 "If we had good relations with Saudi Arabia, would the West have been able to impose sanctions (on Iran's oil)?", Akbar Hashemi Rafsanjani asked in the latest issue of the International Studies Journal, a three-monthly Iranian publication.

"Only Saudi Arabia could fill the void left by Iran. (All they need do is) produce oil within their OPEC quota, and then no one would be able to harass us," he said.

He also reiterated his longstanding position that Iran should resume diplomatic relations with the United States which were cut off in the aftermath of the 1979 Islamic revolution.

"If we negotiate with them (other world powers: Europe, China and Russia), why should we not talk with America?" he said, taking up an argument he said he asked in a letter years ago to the late founder of Iran's Islamic republic, Ayatollah Ruhollah Khomeini.

"The meaning of negotiation is not that we submit to them. We negotiate, and if they accept our positions or we accept theirs, then it is done."

Rafsanjani, who was president 1989-1997, now chairs Iran's Expediency Council, which is tasked with providing counsel to Khamenei.

He is seen as a pragmatic voice in the regime, but one who has lost much of his influence to hardliners who hold sway over the parliament and military. His position on renewing dialogue with the United States, in particular, has been rejected.

Saudi Arabia, a U.S. ally that is also the biggest OPEC producer, is facilitating Western sanctions by promising to tap its spare capacity to make up for any imposed shortfall of Iranian oil exports.

The United States this year has been actively working to try to curb Iranian oil sales, which are vital for Tehran's finances. Washington and its allies believe Tehran is seeking nuclear weapons capability, something the Islamic republic denies.

Iran and Saudi Arabia have long competed for influence over the Middle East. They remain divided by religion (Iran is Shiite while Saudi Arabia is Sunni) and by their relations with the United States.

Rafsanjani said that "relations with Saudi Arabia are not a trivial matter" and stated: "I think it is still possible to form good relations (with Riyadh). But there are people who do not want this... some harsh remarks coming from both sides should be corrected."

Iran is resisting Western efforts to make it yield on its nuclear program through sanctions.

Talks between Iran and the five permanent U.N. Security Council members plus Germany are due to be held late next week to address the showdown. The last round of negotiations, held in Istanbul in January 2011, collapsed.