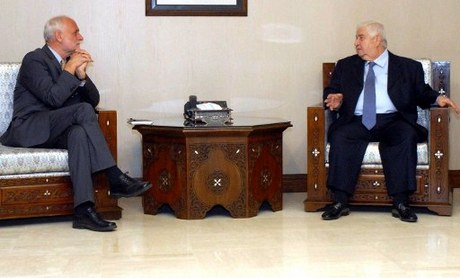 An advance U.N. team preparing the deployment of observers in Syria is expected in Damascus within the next two days, the spokesman for U.N.-Arab League envoy Kofi Annan said Tuesday, as Damascus pledged it will do its utmost to ensure the success of a Red Cross mission to the strife-torn country.

Annan told the U.N. Security Council on Monday that Syrian President Bashar Assad had accepted an April 10 deadline to start implementing a peace plan and to complete a troop withdrawal by then.

He also said the Council had to consider whether to send an observer mission to monitor events in Syria, where activists say over 10,000 people have been killed in a brutal crackdown against protesters since March 2011.

The observers can be sent only after the Security Council passes a resolution ordering their deployment, and when there is a cessation of violence, the spokesman said.

Meanwhile, Syrian Foreign Minister Walid Muallem met Jakob Kellenberger, the visiting head of the International Committee of the Red Cross, which has been pushing for a daily humanitarian truce in the year-long conflict in Syria.

"Mr. Muallem reviewed the details of the ICRC mission and needs within the scope of its humanitarian work in Syria," his office said.

"He reiterated Syria's willingness to provide the ICRC with all that is needed to ensure the success of its humanitarian mission."

It added the two sides had agreed on a "cooperation mechanism" between the ICRC, the Syrian Arab Red Crescent and the foreign ministry in order to overcome any obstacles.

"Kellenberger for his part expressed his appreciation to Syrian authorities for allowing the ICRC access to areas affected by the unrest in order to provide assistance to those in need," said the statement.

Ahead of his third trip to Syria since 2011, Kellenberger said he was "determined to see the ICRC and the Syrian Arab Red Crescent expand their presence, range and scope of activities to address the needs of vulnerable people.

"This will be a key element of my talks with the Syrian officials," he said in a statement.

Beyond discussing aid issues, Kellenberger would also seek access to detention centers as well as examining "practical measures for implementing our initiative for a daily two-hour cessation of fighting," the statement said.

The ICRC has been central in pushing for a daily humanitarian truce, with Kellenberger traveling to Moscow to get Russia, a key Syria ally, to back the idea.

Kellenberger also visited the United States last week where he discussed the situation in Syria with Secretary of State Hillary Clinton.

Let's see how many they slaughter while the "cooperate".

Is it me, or is Muallem fatter than ever?

The only way you can cooperate with the red cross, is by giving them more work.