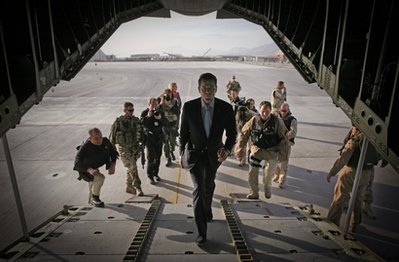 Germany's popular defense minister quit Tuesday a week after being stripped of his doctorate for alleged plagiarism, depriving Chancellor Angela Merkel's government of its star performer.

"I give particular thanks to the chancellor for all the support she has given me and her great trust and understanding," Karl-Theodor zu Guttenberg told a hastily convened news conference in Berlin.

"I was always ready to fight. But I have reached the limits of my strength."

The suave aristocrat, 39, became one of the most popular figures in Merkel's cabinet since bursting on the scene in 2009, impressing first as economy minister and then at defense slashing Germany's bloated armed forces.

Party rallies ahead of Merkel's re-election in late 2009 saw the nobleman from Bavaria's Franconia region feted like a pop star. He was even touted as a possible successor to the 56-year-old chancellor at the helm of Europe's biggest economy.

Merkel, whose party suffered a crushing defeat on February 20 at the first of 2011's seven regional elections, had stood by her minister, saying she "didn't appoint him as a research assistant.”

He was never a hit with the media -- the mass-circulation Bild being the notable exception -- and papers gleefully went on the attack when accusations he had ripped off others' work for his thesis emerged two weeks ago.

Zu Guttenberg, who can trace his family back to the 12th century and whose wife is a direct descendant of the 19th century "Iron Chancellor" Otto von Bismarck, was ridiculed as "Baron Cut-And-Paste" and "Zu Googleberg.”

Journalists had previously jumped on a series of minor scandals from an alleged mutiny after a death on a naval training ship off South America in November to his handling of a controversial Afghan airstrike in 2009.

In December he was accused of turning a visit to German troops in Afghanistan into a publicity stunt because he took along not only his wife but also a television chatshow host.

But the plagiarism row, which broke after a law professor close to the opposition went through his doctoral thesis, was what finally broke him.

Internet sleuths set up a collaborative website, or Wiki, to comb through the 475 pages, concluding that more than two-thirds of the dissertation contained evidence of unattributed copying.

Zu Guttenberg had previously asked the university to take back the title, saying there were "serious technical faults which contravened proper academic standards.”

"I am a human being, who has weakness and who makes mistakes," he had said.