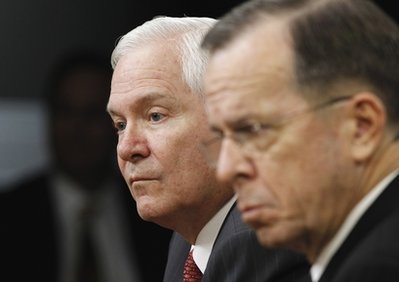 U.S. defense leaders played down the likelihood of imposing a no-fly zone on Libya, urging a cautious approach to any military action against Moammer Gadhafi's forces.

The U.S. military's top officer, Admiral Mike Mullen, said on Tuesday a no-fly zone would be "extraordinarily complex" to carry out while a top general warned there should be "no illusions" about what it would take to shut down the Libyan leader's air force.

Defense Secretary Robert Gates, speaking for the first time since a popular revolt spread across Libya, said there was no agreement within the NATO transatlantic alliance about any military intervention against Gadhafi's regime.

"There is no unanimity within NATO for the use of armed force," Gates said at a joint press conference with Mullen.

Gates said military actions "have their own consequences and second and third order effects, so they need to be considered very carefully."

All options would be presented to President Barack Obama, said Mullen, though he appeared reluctant about a no-fly zone.

"It's an extraordinarily complex operation to set up," said Mullen, chairman of the U.S. Joint Chiefs of Staff.

Calls for a no-fly zone, similar to those imposed on Iraq and Bosnia in the 1990s, have come in response to media accounts that Gadhafi's forces have used aircraft to fire on civilians.

But both Mullen and Gates would not confirm the reports.

Mullen agreed with an assessment voiced earlier by the head of U.S. Central Command, General James Mattis, who said that enforcing a no-fly zone would be "challenging," requiring first bombing radar and missile defenses in Libya.

"You would have to remove the air defense capability in order to establish the no-fly zone so it -- no illusions here, it would be a military operation," said Mattis.

"It wouldn't simply be telling people not to fly airplanes."

The United States and its partners also might have to ask other countries in the region, including Egypt or Tunisia, for permission to use their airfields.

Gates confirmed he had approved the deployment of several ships, including the U.S.S. Kearsarge amphibious assault ship, to sail toward Libya, with the Kearsarge due to pass through the Suez Canal from the Red Sea "shortly."

U.S. Secretary of State Hillary Clinton said Libya was at a crossroads between progress to a "peaceful democracy" or "protracted civil war".

British Prime Minister David Cameron, a leading advocate of the no-fly option, said it was unacceptable for Gadhafi to "be murdering his own people, using airplanes and helicopter gunships and the like".

NATO intervention in Libya might be "extremely counter-productive" in the eyes of Arab public opinion, Juppe said, while top U.S. military officials stressed the lack of international unanimity and the logistical problems.

Salwa Bughaighi, a member of the coalition trying to run Benghazi, said they would seek a no-fly zone to prevent Gadhafi from reinforcing his strongholds in Tripoli and Sirte.

The no-fly option received backing from the exiled crown prince of Libya, Mohammed el-Senussi, who said military action should go no further than that.

The ships, which will be joined by an additional 400 Marines, "will provide us a capability for both emergency evacuations and also for humanitarian relief," he said.

The U.N. refugee agency said the situation on the Libya-Tunisia border was reaching crisis point as desperate expatriate workers pour across, fearful of a bloody rearguard action by diehard regime elements.

More than 100,000 people have already left Libya to escape a vicious crackdown by Gadhafi loyalists which has left at least 1,000 dead, according to conservative U.N. estimates.