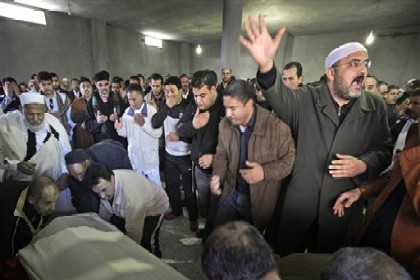 At least 6,000 people have died since the start of the revolt against Libyan leader Moammar Gadhafi's regime two weeks ago, a spokesman for the Libyan Human Rights League said Wednesday.

"Victims in the whole country were 6,000," Ali Zeidan told reporters in Paris, adding that this included 3,000 in the capital Tripoli, 2,000 in the rebel-held second city Benghazi and 1,000 in other cities.

"This is what people told us, but it can be more," he added, at a press conference organized by the International Federation for Human Rights.

Diplomats have said that between 1,000 and 2,000 people have been killed in the rebellion, although precise figures are hard to come by because of the situation on the ground.

Zeidan said there were thousands of mercenaries deployed in Libya, including 3,000 in Tripoli and 3,000 just outside it, allegedly being commanded by officers from Libya's southern neighbor, Chad.

"Two generals from Chad are leading the mercenaries. They are under the command of Chad's ambassador to Libya," Zeidan alleged, referring to Ambassador Daoussa Deby, the brother of Chad's President Idriss Deby.