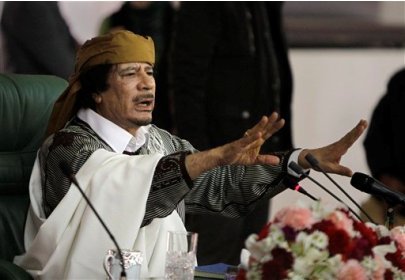 Moammar Gadhafi warned the West on Wednesday against intervening to support the rebellion against him, saying that would unleash a "very bloody war" in which "thousands of Libyans would die."

Speaking live on state television, Gadhafi again blamed al-Qaida for the challenge to his 41-year iron-fisted rule, saying the objective was to control Libya's land and oil and promising to fight to the last man and woman.

Addressing "our friends in Europe and the West," he said it is "not at all in their interest to shake the Libyan regime," and that the country could turn to Chinese, Indian, South Korean and Brazilian firms as business partners.

In an impassioned two-and-a-half hour speech, he denied there had been any peaceful demonstrations since the uprising broke out on February 15 and challenged calls for him to step down, saying he has "no real power."

As the United States, NATO and the United Nations consider imposing a no-fly zone on Libya, or even launching air strikes, the former colonel warned the "battle will be very very long" if there is any intervention.

"If the Americans or the West want to enter Libya they must know it will be hell and a bloodbath -- worse than Iraq."

But without elaborating, he praised U.S. President Barack Obama, who has called for him to leave, saying he has an "acceptable policy. He is not a Yankee like Bush or Clinton; he can avoid a new Iraq or a new Afghanistan."

And he repeated that he would not abandon Libya.

"They speak of Gadhafi leaving ... You leave. Gadhafi is staying ... leading the revolution."

Turning to the unrest, which he blamed on al-Qaida "sleeper cells" that had first been activated in the eastern town of Al-Baida and later in nearby Benghazi, he said "there are no peaceful demonstrations in Libya."

"If there were why are foreigners fleeing, the embassies closing in Tripoli, (oil company) employees fleeing from the desert?"

"These gangs made oil companies afraid, flee and stop production. Oil production is at its lowest."

"The conspiracy has become clear," he said, adding the aim was to take control of Libyan land and oil.

"This is impossible, impossible. We will fight to the end, to the last man, the last woman ... with God's help."

Libya has the largest oil reserves in Africa and is the continent's fourth-largest producer, and Gadhafi said the "oilfields are safe and under control, but the foreign firms are afraid."

He said Libya would turn to the East -- China, India, South Korea -- and other friendly nations such as Brazil for economic cooperation.

"We will get Chinese and Indian firms instead of Western ones."

He also addressed the Libyan people, whom he said were solidly behind him, warning of the grave consequences that could result if the rebellion succeeds and urging them to snuff it out, while also promising a shining future if they did.

He told the people of Benghazi "to go out and remove the weapons from the hands of the children."

"This situation cannot last," he said, adding that "nowhere, not in America, not in China ... no one allows armed gangs to roam ... they must be arrested."

On the plus side, he said "unemployed youths have thousands of job opportunities now that the foreigners are out. All the youth can go to the banks, take interest-free loans ... if they want to marry, to buy a car, to get a home."

Gadhafi was frequently interrupted by chants of support, which he praised.

One woman in a black robe and headscarf broke shouting "you are a sword that does not break."

Gadhafi criticized media reports about the resignations of senior officials from his regime including several military leaders and ambassadors abroad.

"The resignations from abroad, the statements from inside (Libya) ... don't believe them," he said.

"As far as Libya is concerned ... nothing happened ... and it is strange that the world received news from correspondents and TV stations not present in Libya."

"They don't want any real news from Libya," Gadhafi said, before adding that "there are no political prisoners in Libya at all."

"The Libyan people challenge ... even Moammar Gadhafi who has no power," said Gadhafi, who rose to power after overthrowing the monarchy in a 1969 coup.

"Moammar has no real power to surrender."

Gadhafi urged the international community to establish a commission of inquiry into the estimated deaths of at least 1,000 people killed in the unrest by his forces.

"We urge the world, the United Nations, to see where the people were killed, to send a fact-finding team to investigate."

He also lashed out at moves by several countries to freeze Libyan assets, which he called an act of "piracy."

"The assets are the assets of the Libyan nation" and they have "no right" to seize them. "I am the asset of Libya, not the American dollar."

Gadhafi remains entrenched in Tripoli in the west of the oil-rich North African country.