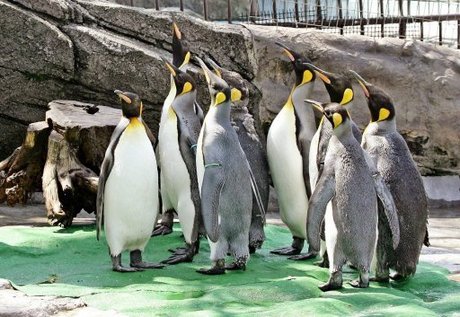 Antarctica boasts almost twice as many emperor penguins as previously thought, researchers have discovered using satellite mapping technology to count the iceberg-huddling birds from above.

An international team of scientists led by the British Antarctic Survey (BAS) found 595,000 birds, far beyond previous estimates of 270,000 to 350,000, according to the study on Thursday in the open-access journal PLoS ONE.

"We are delighted to be able to locate and identify such a large number of emperor penguins," said lead author and BAS geographer Peter Fretwell.

"This is the first comprehensive census of a species taken from space."

Emperor penguins are the largest kind of penguin, standing up to four feet (1.2 meters) tall.

They cannot fly but are known for their revolving group gatherings to stay warm on the ice in wind chill conditions of -76°F (-60°C). The males also tend to their partner's egg while the female goes off to hunt for fish and krill.

Satellite imagery clearly showed the penguins' black and white colors in contrast to the ice, and researchers were able to count 44 colonies along the Antarctic coast, seven of which were previously unknown.

Scientists have been worried that global warming may result in ice-melting, particularly in northern Antarctica, that could endanger the penguins' habitat.

The new method for tracking their numbers may help with efforts to monitor the species, said co-author Phil Trathan, also from the BAS.

"Current research suggests that emperor penguin colonies will be seriously affected by climate change," he said.

"An accurate continent-wide census that can be easily repeated on a regular basis will help us monitor more accurately the impacts of future change on this iconic species."

Co-author Michelle LaRue from the University of Minnesota said the technique should enable other species to be more accurately counted, too.

"The implications of this study are far-reaching: we now have a cost-effective way to apply our methods to other poorly understood species in the Antarctic, to strengthen on-going field research, and to provide accurate information for international conservation efforts."

Collaborators on the study also included the Scripps Institution of Oceanography and the Australian Antarctic Division, with additional funding from the U.S. National Science Foundation.