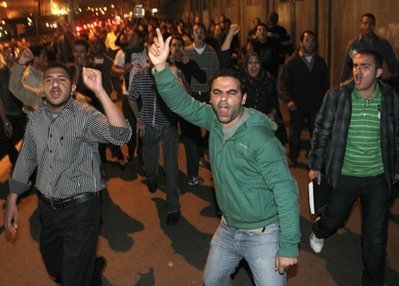 Armed civilians attacked hundreds of Egyptian protesters outside the state security headquarters in Cairo on Sunday, as the army fired warning shots and used sticks to disperse the crowd, witnesses said.

Around 500 protesters tried to storm the headquarters of the powerful security apparatus in Cairo's Lazoghly neighborhood and were attacked with knives and rocks by men in civilian clothing, the witness told Agence France Presse.

"The protesters were attacked by the thugs that are brought out at all the demonstrations. They had large knives and were throwing large rocks straight at the protesters," he said.

When protests erupted on January 25 to demand the ouster of president Hosni Mubarak, the veteran leader's loyalists used hired thugs to beat back protesters.

Outside the Lazoghly building, the army began to beat the crowd with sticks, firing warning shots into the air and forcing protesters to flee into side streets, he said.

"The protesters are now really angry and heading to Tahrir Square," the epicenter of anti-regime protests that toppled Mubarak in February, the witness said.

A security official confirmed to AFP that men in civilian clothing had attacked the protesters outside the Lazoghly building.

Protesters who brought about Mubarak's overthrow have called for the abolition of the State Security Investigations, or SSI, which counts at least 100,000 employees and a large network of informants, a security official told AFP.

On Saturday several state security buildings around the country were stormed, as protesters tried to retrieve files kept on the population by the powerful regime apparatus that monitors political dissent.

Around 2,500 protesters stormed the state security building in Cairo's Nasr City "grabbing official documents before officials could burn or shred them," a security official told AFP.

Hundreds more tried to barge their way into another state security building in the Cairo suburb of Sheikh Zayed, where guards inside fired into the air to try to disperse the crowd.

Protesters surged into the state security headquarters in the northwestern city of Mersa Matruh, gathering up thousands of documents before setting the building on fire.

Residents of the coastal resort then sat at nearby cafes leafing through the documents for evidence of human rights abuses as smoke billowed from the headquarters nearby, a witness told AFP.

Mubarak resigned on February 11, handing power to a military council that has vowed to pave the way to a free and democratic system, pledging to bring to justice all those found guilty of abuse.