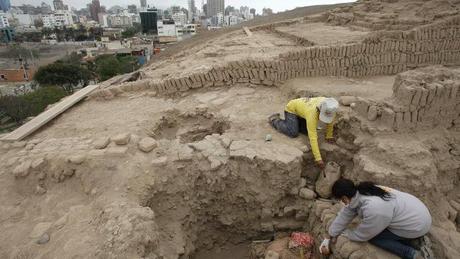 On a street corner, under a garbage dump, at a construction site -- pre-Inca archeological sites abound in Lima, where the ruins of hundreds of sacred places, or "huacas", are at the mercy of urban growth and public indifference.

In the middle of the Miraflores residential district, one of Lima's best restaurants opens onto the terrace of an ancient pyramid, offering fine food in a 1,500 year-old setting bathed in artificial lighting.

The Huaca Pucllana, the city's archeological star, has been impeccably preserved thanks to a partnership with the restaurant, but the rare public-private initiative is an exception to the rule.

About three kilometers (two miles) away, in the densely populated Chorrillos neighborhood, a sign marks the existence of an "intangible archeological zone". Its base is heaped with garbage. A small Catholic shrine sits in the middle of the huaca, built "thanks to the patronage" of the local mayor, as another sign says.

There is no registry that keeps track of the huacas -- which comes from the Quechua word "wak'a" meaning sacred place -- but archeologists say more than 300 of the adobe structures are spread around this city of nine million people.

"Most huacas are officially the cultural patrimony of the nation, but the area around them that cannot be touched is not delineated," bemoans Cristian Vizconde, an archeologist who heads a project at the biggest site in northern Peru.

"This omission allows developers and squatters to invade them, or mayors to build parks and playing fields on them," he said.

And where huacas have not been designated as cultural patrimony, "they have virtually disappeared," he said.

In a way, there is nothing new here: Lima is expanding along with its booming economy, paving over the city's ancient foundations with non-stop construction, just as it always has.

Archeologist Elias Mujica recalls that the presidential palace on the Plaza de Armas -- or its predecessor built by Francisco Pizarro after founding Lima in 1535 -- was erected on top of the Taulichusco palace, the seat of the city's government in pre-Columbian times.

The colonial city hall built in 1549 is on another sacred site, the Cabildo huaca, and a temple dedicated to the god Puma Inti once stood where the cathedral is today.

The remaining huacas "for the most part are not protected, which is why they have been invaded by families without homes, or turned into dumps or refuges for delinquents," said Luis Caceres, director of archeology at the Culture Ministry.

There are notable exceptions like Pucllana or the Huallamarca huaca, a vast second century pyramid that today is enclosed by a park and museum. But most of Lima's huacas face an uncertain future due to a lack of money for conservation projects, said Caceres.

"The state cannot be responsible for everything. We think we have to work more closely with the local population" to preserve the huacas, said Jorge Silva, an archeologist at the University of San Marcos.

An effort launched in 2010 to make a tourist attraction of 10 of Lima's huacas has failed so far to take off. For now, a "save a huaca" campaign that seeks to enlist private sector support for threatened sites offers the best hope for their preservation.