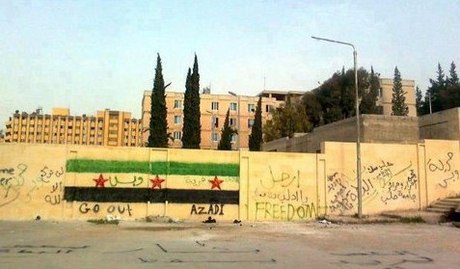 Syria's Aleppo University on Thursday announced it was suspending classes after pro-government forces killed four students and arrested more than 200 in a campus raid during anti-regime protests.

In a message posted on its website, the northern city's university told students that classes were suspended until final exams on May 13.

"Students were barred from entering the campus and were told that the university dorms were shut down until further notice," Mohammed al-Halabi, an activist on the ground, told Agence France Presse via Skype.

He said security forces had raided the dormitories Thursday morning and had thrown out students and their belongings. He said some of the rooms were torched.

The decision to shut down the university came after Syrian troops and armed supporters overnight stormed an anti-regime protest on campus killing four students and arresting more than 200, according to the Syrian Observatory for Human Rights.

The Britain-based watchdog also reported that 28 students were wounded, three of them critically.

Activists said the raid was carried out in response to daily anti-regime demonstrations at the university in Syria's second largest city.

"Security forces stormed the campus in large numbers at night and opened fire during a large student demonstration calling for the fall of the regime," Halabi said.

In a video posted by activists on YouTube, heavy gunfire and screams are heard while dozens of men, identified as members of the security and intelligence services, are seen entering the campus.

Overall, more than 11,000 people have died in Syria since the revolt against the regime of Bashar al-Assad broke out in March last year, according to the Observatory.