Hariri Wants a Country that Doesn’t Diffrentiate between the Lebanese 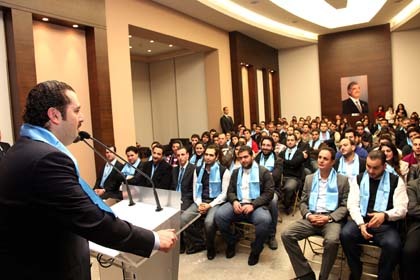 Caretaker Premier Saad Hariri has said that the March 14 forces want a country “that does not differentiate between the Lebanese.”

During a meeting with delegations from the "Future Youth", “Future Women” and Beirut families at Center House, Hariri described the current phase as difficult and complex, but expressed hope to overcome it with the cooperation and support of the Lebanese.

The Lebanese are loyal to their country and defend its independence, freedom and sovereignty, he said.

“The Lebanon that we want is the one that does not distinguish between the Lebanese. It is the Lebanon of freedoms and the civil state, the non-confessional Lebanon, where all citizens abide by the law,” Hariri said.

Hariri stressed the importance of participating in the March 13 rally at the Martyrs Square to express the March 14 alliance’s adamancy to defend the sovereignty, independence and freedom of Lebanon.