Rival Rallies to Hit Moscow ahead of Putin Inauguration 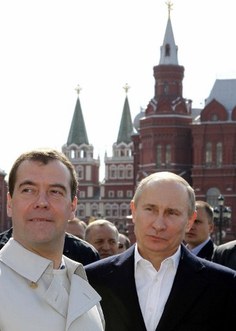 Vladimir Putin supporters unveiled plans on Saturday to draw more than 50,000 people onto the streets of Moscow in a show of force ahead of the strongman's inauguration to a third presidential term.

Russia's current prime minister will take back the Kremlin seat he already held from 2000-2008 during a swearing-in ceremony on Monday that follows his thumping March 4 election win against only token opposition.

The margin of his victory took much of the steam out of mass protests that had swept Moscow in the winter months and seemed to briefly catch the authorities off guard.

But the protest movement now intends to hold a self-proclaimed "March of Millions" on Sunday that was authorized by the city after weeks of negotiations but officially limited to just 5,000 people.

A coalition of Putin supporters said they needed no permit from Moscow officials to gather for a "celebration" at Victory Park -- a site dedicated to Russia's defeat of Napoleon in 1812.

The event was timed to coincide with the first anniversary of Putin's decision to create a new movement called the All-Russian People's Front (ONF).

The group is tipped to become Putin's primary power base during the first of what could potentially become two new six-year terms for the 59-year-old leader.

A top city official said Putin's group did not need permission to bring out such large numbers onto a public square because "what they will be having is not a meeting or a march or a protest."

The entire transition of power to Putin from outgoing President Dmitry Medvedev, who served one term after his mentor had to stand down at the end of two successive mandates, has been tightly scripted over the coming few days.

The winter protests were in large part fuelled by the Soviet-style job swap agreement that Putin and Medvedev struck last year without any public debate.

The plan will see Putin nominate Medvedev -- picked by the ex-KGB spy to fill his Kremlin seat while Russia engineered constitutional changes that would allow him to run for president again -- for parliamentary confirmation Tuesday.

Medvedev is expected to visit parliament only hours after Putin's swearing in ceremony to complete consultations under which his candidacy would then be swiftly approved.

Medvedev looked sombre on Saturday as he gathered all the government ministers in the Kremlin for the last time to express his appreciation for their "command performance".

Russia's only one-term president has been broadly criticized for failing to live up to his liberal political credentials and doing little to wean the country's economy off its strong dependence on oil exports.

"We pile up a lot of economic problems in the years we have been working together -- during both the (2008-2009) crisis and afterwards," Medvedev admitted before his ministers.

"But there have also been some obvious achievements that enable us to say that overall, we have managed to fairly successfully overcome the crisis," Medvedev said in what may very well be his last Kremlin speech.