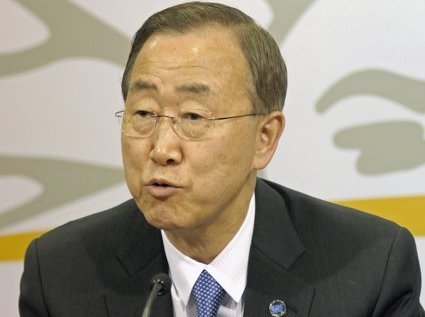 Bomb attacks like the one near a U.N. convoy in Syria on Wednesday cast doubt on the future of the ceasefire monitoring mission in the country, U.N. leader Ban Ki-moon said.

There was no immediate evidence that U.N. monitors in the convoy were the target of Wednesday's attack, Ban said through a spokesman. But he expressed deep concern at the growing use of roadside and other improvised bombs across Syria.

"Such incidents, in addition to the continued violence reported in many cities in Syria, call into question the commitment of the parties to the cessation of violence and may have a direct impact on the future of the (U.N.) mission," Ban said in a statement released by U.N. spokesman Martin Nesirky.

The roadside blast at a military checkpoint near the protest city of Daraa injured 10 Syrian troops escorting U.N. observers, according to the statement.

"We have no evidence to believe that the explosion was intended to target the UNSMIS convoy; however, this incident demonstrates the difficult and challenging conditions under which our United Nations observers are operating," said Ban.

"It also demonstrates the volatile and dangerous situation in which the Syrian people have been living for months."

Ban "strongly condemns this attack and calls on all parties to adhere to the cessation of violence and to cooperate with, support and protect the UNSMIS observers."

Ban reaffirmed that the U.N. mission and efforts of U.N.-Arab League envoy Kofi Annan "are possibly the only remaining chance to stabilize the country and avert a civil war," said the statement.

U.N. officials say there are now 70 military observers and 43 civilian staff in the U.N. Supervision Mission in Syria (UNSMIS), which was set up by the U.N. Security Council to monitor a shaky cessation of hostilities started on April 12.

The U.N. says well over 9,000 people have been killed in Syria since an uprising against President Bashar al-Assad started in March last year.

Reacting to the roadside blast, U.S. State Department spokeswoman Victoria Nuland said "it is further evidence that the ceasefire is not holding and we really have to continue to pressure the Assad regime and all actors.

"And this is further to why we've got to get the monitors into as many places as we can so we have eyes on the streets and the opportunity to protect the Syrian people," Nuland said in Washington.

The UN is a weak organisation. It is only like a local council... it has no real power... the member states and non members are the ones that really make things happen...

The UN is a weak organisation. It is only like a local council... it has no real power... the member states and non members are the ones that really make things happen...