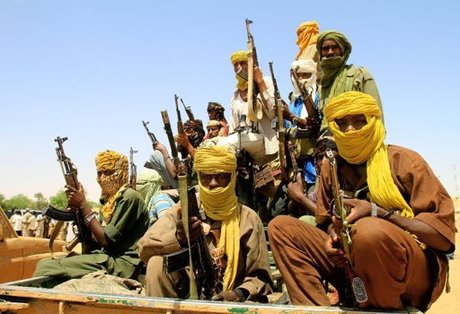 The United Nations said bodies lay in the battle-damaged town of Girayda on Wednesday, after a brief occupation by rebel troops in the war-plagued Darfur region of western Sudan.

Sudan's army regained control of Girayda town and the surrounding area but nine government soldiers died in the effort, reported the Sudanese Media Center (SMC), which is close to the security apparatus.

Foreign peacekeepers observed the aftermath when they resumed patrolling the area on Wednesday, said Christopher Cycmanick, a spokesman for the African Union-United Nations peacekeeping mission in Darfur (UNAMID).

"There were a number of dead and there was considerable damage to the town infrastructure," he said. "Fuel had been stolen and some places had been looted."

UNAMID has a base just outside Girayda, and the area is also home to a camp for Darfur residents displaced by the conflict which is nearly a decade old.

Rebels said on Tuesday they had seized control of the town from government troops, the latest in a reported upsurge of fighting in Darfur.

The Sudan Liberation Army (SLA)-Minni Minnawi faction said it carried out the attack with rebels of another SLA faction headed by Abdelwahid Nur.

SMC quoted a spokesman for the South Darfur state government, which includes Girayda, as saying an operation to retake the area began Tuesday night and "continued for many hours" to expel the rebels to the edge of a surrounding district.

The rebels suffered "heavy losses," the government spokesman said, without giving figures. He added that troop reinforcements have been sent to the region.

Girayda is about 100 kilometers (60 miles) south of Nyala, the South Darfur state capital.

In April, the head of UNAMID expressed concern that rebels in Darfur were exploiting tensions between Sudan and South Sudan along their disputed frontier.

The U.N. estimates that at least 300,000 people have died as a result of the Darfur conflict, which began in 2003 when rebels from non-Arab tribes in Sudan's far west rose up against the Arab-dominated Khartoum regime.

In response, the government unleashed state-backed Janjaweed militia in a conflict that shocked the world and led to allegations of genocide. Since then, much of the violence in the vast region has degenerated into banditry.

The Sudanese government puts the death toll at 10,000.