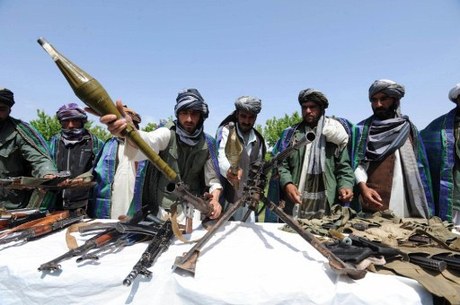 A firefight erupted as the attackers tried to get through a police checkpoint in an attempt to attack the Yahyakhail district governor's office in Paktika province, provincial police chief Dawlat Khan Zadran told Agence France Presse.

"Only one of them managed to detonate the suicide vest he was wearing, the rest were gunned down by security forces."

Two police and two civilians were killed while five others, including three policemen, were injured in the blast, Zadran said.

Taliban insurgents seeking to topple the government of President Hamid Karzai claimed responsibility for the attack.

Officials had earlier put the casualty toll to one policeman killed and two injured.

Hundreds of miles to the west, a roadside bomb killed four other policemen in the province of Badghis on Wednesday, provincial police chief, Abdul Jabar told AFP, blaming the Taliban.

The latest attacks came a week after the Taliban announced the launch of their spring offensive, a campaign of bombings and attacks that picks up every year as the weather conditions improve.

Paktika was the scene of another attack on Wednesday in which a provincial education director was severely wounded in a Taliban bomb and gun attack that left four of his guards dead.

The Taliban banned girls from going to school while in power from 1996 to 2001, and have targeted schools and teachers as part of their insurgency since being ousted in a U.S.-led invasion.