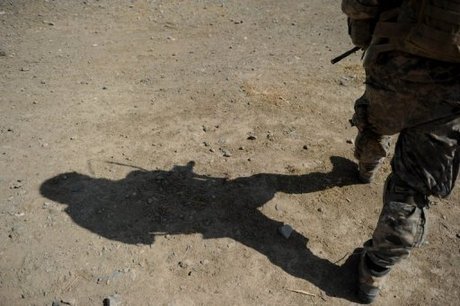 Two NATO troops were killed by two men in Afghan police uniforms in southern Afghanistan Saturday, the military said, with Afghan sources identifying the victims as British soldiers based in Helmand province.

A spokesman for NATO's International Security Assistance Force (ISAF) said the attackers were believed to be insurgents dressed as police, but a senior Afghan security official said they had been in the police force for a year.

"We are aware of the claims that the shooters were AUP (Afghan Uniformed Police); however, operational reports indicate these were insurgents dressed in AUP uniforms and not actual AUP," ISAF said.

"The event is still being assessed and additional information may be released as appropriate," a spokesman said.

If it is confirmed as a green-on-blue attack, in which Afghan forces turn their weapons against their Western allies, it would take the toll this year to 22 NATO soldiers killed in at least 16 such attacks.

One of the police shooters "was killed when foreign troops returned fire, the second policeman has been injured", he said.

A senior security official in the province, Mohammed Ismail Hotak, confirmed the attack, saying the policemen had been in the force for a year.

ISAF confirmed that one of the attackers was killed, adding that the other "is being sought".

An increasing number of Afghan troops have turned their weapons against NATO soldiers who are helping Kabul fight a decade-long insurgency by hardline Taliban Islamists.

Some of the assaults are claimed by the Taliban, who say they have infiltrated the ranks of Afghan security forces, but many are attributed to cultural differences and antagonism between the allied forces.

ISAF has taken several security measures in response to the shootings, including assigning "guardian angels" -- soldiers who watch over their comrades as they sleep.

Aside from the "green-on-blue" shootings, relations between the United States and its Afghan allies have been rocked this year by a series of incidents involving American troops.

Videos and pictures have emerged of U.S. forces abusing Taliban corpses, copies of the Koran were burnt on a major U.S. military base and an American sergeant has been charged with 17 counts of murder over a massacre of civilians.

And on Friday, NATO and U.S. forces admitted that a number of civilians were killed in two separate airstrikes, days after President Hamid Karzai warned that such deaths threatened relations with the U.S.

A joint statement by ISAF and U.S. forces gave no details of how many civilians died in each incident, but local officials have put the total at more than 20, including women and children.

ISAF has around 130,000 soldiers fighting alongside some 350,000 Afghan security personnel against the Taliban-led insurgency, but they are due to pull out of the country in 2014.

Two other NATO soldiers died Saturday, one in a bomb blast and the other as a result of a "non-battle related injury", ISAF said, without identifying the nationalities of any of the victims.