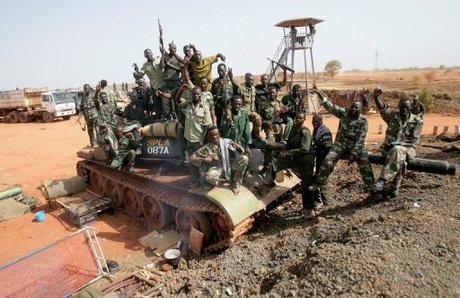 U.N. leader Ban Ki-moon has called on Sudan to move its troops out of the disputed territory of Abyei after rival South Sudan withdrew its security forces.

Ban called on both governments to fall in line with a U.N. Security Council deadline to start talks on all their disputes, said U.N. spokesman Martin Nesirky in a statement released late Saturday.

"The secretary general welcomes the withdrawal of the South Sudan Police Service from the Abyei area. He strongly urges the government of Sudan to also remove its forces from the area," said Nesirky.

Sudan and South Sudan agreed in June last year that they would move their forces out of Abyei and set up a joint administration in the disputed territory which Khartoum troops seized in May 2011.

Since then South Sudan has formally seceded from the north and growing border tensions have created fears that the two could fight a new all-out war. Two million people died in two decades of north-south civil war up to 2005.

The U.N. Security Council passed a resolution on May 2 giving the two sides two days to halt hostilities, two weeks to start talks under African Union auspices and three months to reach an accord.

Ban "urges the governments of Sudan and South Sudan to resume negotiations under the auspices of the African Union High-Level Panel to resolve the outstanding issues between them," said the spokesman.

He also said the two sides must activate agreed measures to draw up their border, one of many disputes left hanging over them since their split last year.