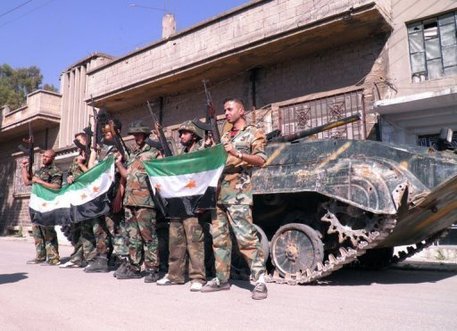 At least 37 people were killed in violence across Syria on Monday, among them 23 soldiers who died in fierce clashes between regime forces and rebels in the central city of Rastan, activists said.

The Britain-based Syrian Observatory for Human Rights said reports indicated that three troop carriers were destroyed in the clashes that began at dawn on the outskirts of the rebel-held city in Homs province, which U.N. observers had toured last month.

A lieutenant who had defected was also killed in the clashes, and random regime gunfire reportedly left two civilians dead in the city of Homs itself.

Regime forces launched an offensive on Rastan at the weekend but met with sharp resistance from rebels seeking the ouster of the regime of President Bashar Assad.

The Observatory said a child was killed and dozens wounded in shelling of the city by Syrian troops on Sunday. The bombardment by regime forces resumed following Monday's deadly clashes, it added.

"The regime forces in the course of two hours fired 300 rockets at Rastan before launching their assault," Sami Kurdi, the FSA spokesman for Homs province, told Agence France Presse from Rastan.

"The army tried to advance on the city at dawn but it met fierce resistance from FSA soldiers massed there," he added.

"The deserters like the residents of Rastan were on the alert, ready to do anything to prevent the regular troops from entering the town," because "people know what happens when the army enters a town that has revolted," Kurdi said.

Activists and NGOs have accused regime troops of repeatedly committing abuses in pro-rebel areas like Homs and Idlib.

The Observatory reported deadly violence elsewhere on Monday, with three civilians killed by regime forces' gunfire in southern Daraa province, including a child and a Palestinian refugee.

And in Quraya in the eastern province of Deir Ezzor, a 15-year-old boy was killed by machinegun fire as regime forces raided the town, the Observatory said, bringing to at least 30 the number of people reportedly killed.

The watchdog added that 15 residents of the city were arrested.

In the capital Damascus, regime forces raided the neighborhood of Qaboon, while snipers were stationed on the roofs of some buildings.

The watchdog said 45 people -- 25 civilians, 15 soldiers and five rebels -- were killed in a surge of violence in various flashpoints on Sunday, despite a ceasefire brokered by U.N.-Arab League peace envoy Kofi Annan that was supposed to take effect on April 12.

Among the dead were a Shiite imam, Sheikh Abbas al-Laham, who leads the prayers in the Ruqayya mosque in Damascus, a revered place of pilgrimage for many religious Iranians. The cleric was assassinated by unidentified gunmen in Damascus, the Observatory said.

Iran supports the Damascus regime, which since 15 March 2011 has faced an unprecedented popular revolt.

More than 12,000 people, the majority of them civilians, have died since the Syrian uprising began in March 2011, according to the watchdog, including more than 900 killed since the April 12 truce.

The butcher Assad must be butchered like the animal that he is.