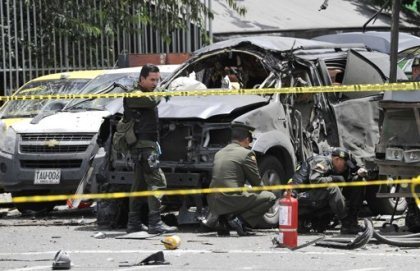 At least two people were killed and 39 wounded in Colombia's capital Tuesday when a bomb exploded in what President Juan Manuel Santos said was an assassination attempt against a former interior minister.

"I've just learned that an attempt was made on the life of Mr. Fernando Londono. He was in his armored car," said Santos, who canceled a planned trip to Cartagena and summoned a meeting of the National Security Council.

"Fortunately, Londono is stable condition in the hospital," Santos said, adding Londono's driver and a police guard were among the dead.

The Colombian Red Cross initially said the blast killed five and wounded 17, but police and the prosecutor's office insisted late Tuesday that the official toll was two dead, 39 wounded. "Other deaths have not been confirmed at this time," a police source told AFP.

Bogota's mayor Gustavo Petro said via Twitter that a suspect had been arrested and that there is surveillance video of the crime scene.

"The entire city should stay alert," he warned in his message.

No one immediately claimed responsibility for the attack, which occurred just after 11:00 am (1600 GMT) on Bogota's busy Calle 74 and Avenida Caracas, a bustling intersection in the northwest of the city filled with foot traffic from businesses and students from nearby universities.

Witnesses described an ear-shattering explosion followed by scenes of carnage.

"It was horrible," one witness told AFP, who said the grisly disaster scene included a body torn in half by the force of the blast lying in the street.

The witness said Londono's bodyguards brandished their firearms as they removed the injured minister from the shattered vehicle and rushed him to a nearby hospital.

Londono, 78, served in the cabinet of former president Alvaro Uribe, a hardliner who governed from 2002 to 2010.

Santos, who followed Uribe in office, vowed not to be cowed by the assault.

"I want to condemn this attack in the strongest terms," said Santos. "We do not know what the purpose of it was, but be absolutely certain that the government is not going to allow itself to be derailed by these terrorist acts."

The attack came shortly after police said they dismantled a car bomb leftist FARC rebels planned to use in an attack on the Bogota police headquarters.

Suspicion for the attack on Londono immediately fell upon the Revolutionary Armed Forces of Colombia, Latin America's oldest and largest guerrilla group.

"Everything is being looked at carefully, and as soon as we have specific hypotheses we will announce them," said Defense Minister Juan Carlos Pinzon.

Witnesses said the blast appeared to have been from a bomb placed on a public bus, but officials could not immediately confirm that.

Half a dozen vehicles were incinerated in the explosion, AFP journalists on the scene said.

The last car bomb to explode in the Colombian capital was on August 12, 2010, two days after Santos was inaugurated. Nine people were wounded in the blast, which police attributed to the FARC.