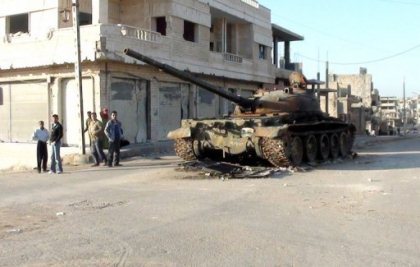 Regime troops shot dead at least five people in a new assault on the flashpoint town of Khan Sheikhun and opened fire on a refugee camp in southern Syria on Wednesday, monitors said.

A child, another civilian and three armed militants were killed by machinegun fire in Khan Sheikhun, the Syrian Observatory for Human Rights said.

Four others died of wounds suffered on Tuesday when regime troops "massacred" 20 people during a funeral procession in the town, according to the Britain-based group.

During the funeral, a convoy of U.N. truce observers came under bomb attack in Khan Sheikhun, damaging three vehicles but causing no casualties, the United Nations said.

Elsewhere on Wednesday, three civilians including a child were killed as troops fired on a refugee camp in southern Daraa province for Palestinians and Syrians displaced from the Israeli-annexed Golan, the Observatory said.

Regime forces also killed a young man in a raid on Mleiha al-Aatsh village of Daraa province, the watchdog said.

And in the central province of Homs, a civilian was killed in the rebel-held town of Rastan, which was under regime bombardment, according to the Syrian Observatory.

The watchdog updated its toll of people killed in Syria on Tuesday to 64, including two rebel fighters and 11 regular army soldiers.

The bloodshed comes despite a truce brokered by U.N.-Arab League envoy Kofi Annan as part of a six-point plan aimed at ending violence that has swept Syria since March 2011, when the uprising against President Bashar Assad began.

The United Nations has accused both sides to the conflict of violating an April 12 ceasefire and warned that the country is edging closer to full-blown civil war.

More than 12,000 people, the majority of them civilians, have died since the Syrian uprising began, according to the Observatory, including more than 900 killed since the truce came into effect.