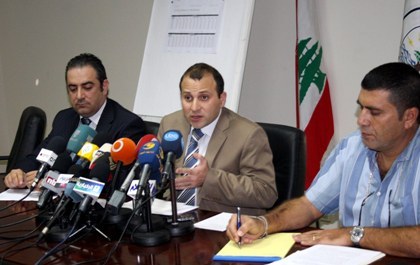 Energy and Water Minister Jebran Bassil on Friday set the average subscription fee to private power generation in all Lebanese areas at LBP 350/kWh for the 5 amperes category.

Bassil noted that this measure enables citizens and municipalities to hold accountable the providers of private power generation in the country. However, he added that it also respects the rights of the providers.

He said that the measure aims at preventing providers from setting unreasonable fees.

Bassil stressed that his initiative serves the interests of both the citizens and the business owners, in addition to giving municipalities the regulatory role.

In Lebanon hooking up to a generator is a common practice throughout the country.

The whole nation seemingly runs on generators which, for a fee, power whole buildings or neighborhoods.

Frustrations over power cuts frequently explode in demonstrations, mainly in the impoverished north of the country and the capital's southern suburbs.

Electricity is a constant concern for the government, which allocates the third largest slice of its budget, after debt servicing and salaries, to power supply.

This summer, said Bassil, the government was able to supply 1,700 megawatts of electricity, while demand was closer to 2,500 megawatts.

"It's a miracle that we are still able to keep producing electricity," said Bassil.

Last June, Bassil announced that the total for unpaid water and power bills by officials and politicians over the years amounted to eight million dollars (6.5 million euros).

The government has finally approved a reform program to guarantee 24-hour electricity by 2015, cutting economic losses due to power cuts, estimated at 4.5 billion dollars a year.(Naharnet-AFP)