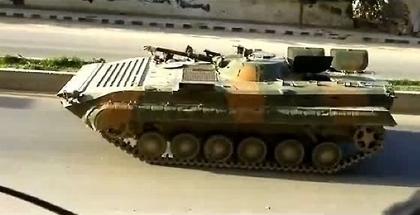 He added that at least 30 shells smashed into the town in a 10 minute period, and urged United Nations monitors, deployed to observe a truce that has been violated daily, to immediately visit Rastan.

Encircled by the army and defended by the largest concentration of rebel soldiers in the country, Rastan has for several months been the focus of an offensive by the regime as it attempts to regain control of the town.

On Monday, the U.N. Supervisory Mission in Syria (UNMIS) reported heavy fighting near Rastan, where activists said at least 23 soldiers and seven civilians died in fierce clashes between government forces and rebels.

Elsewhere Thursday, two blasts rocked the neighborhoods of al-Jamila and al-Furqan in Aleppo, while other explosions were heard across the northern city early morning.

There were no immediate reports of casualties, the Observatory said.

In Damascus province, regime forces carried out raids in the suburbs of Irbin and Kanakar, where three people were arrested.

And in the town of al-Qatifa, clashes broke out after midnight after the defection of several soldiers from an army center.

Regime troops also stormed several neighborhoods in the southern city of Daraa "in an attempt to break a general strike" in progress. The sound of gunfire was also reported, according to the Observatory.

In Khan Sheikhun in the northwest province of Idlib, one civilian died of wounds sustained during an attack on the town Tuesday.

Clashes continue despite a truce brokered by U.N.-Arab League envoy Kofi Annan as part of a six-point plan aimed at ending violence that has swept Syria since March 2011, when the uprising against President Bashar al-Assad erupted.

what wonderful news may it rain bombs for 100 years all over syria!

i like how the syrian observatory for HR is called an NGO...research it n c how it operates if u double guess me...mansour and delta ur comments r really stupid