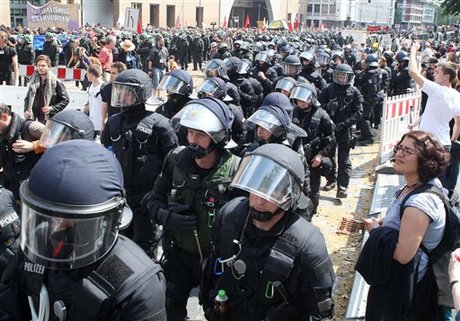 Some 20,000 people joined a march through the centre of the German financial capital of Frankfurt Saturday, protesting against European austerity programs, police said.

It was the only demonstration of the anti-capitalist movement known as "Blockupy Frankfurt" that was authorized by the city and justice authorities. The other protests over the past four days had been banned by city officials.

Organizers put the turnout for Saturday's peaceful march at more than 25,000 people, some of whom were brandishing placards saying "The euro zone is in ruins" and "When unfairness becomes the rule, resistance becomes a duty," an Agence France Presse correspondent at the scene reported.

Since Wednesday, about 5,000 police have been constantly deployed in Frankfurt. Several protests on Friday took place outside the European Central Bank's huge Eurotower building, as well as in the city centre, leading to the arrests of some 400 demonstrators.

Police said most demonstrations passed calmly, while some activists claimed those who had been arrested were left for hours in police buses.

The anti-capitalist movement, modeled after "Occupy Wall Street", had staged its demonstrations seeking to paralyze Germany's financial centre and hinder the work of private banks and the ECB.