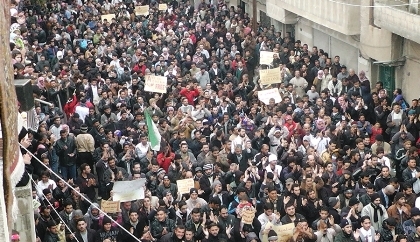 Homs has been hard hit in violent clashes between anti-government protests and pro-government security forces. Last week, at least 15 civilians were "summarily executed" there by regime forces, according to the Syrian Observatory for Human Rights.

"Authorizing peaceful demonstrations and releasing detainees would go some way towards consolidating confidence, which so far has been lacking, so that the political process can get started and can gain traction," said Herve Ladsous, the U.N.'s undersecretary general for peacekeeping operations after meeting with Homs Governor Ghassan Abdelaal.

In addition, he called for public services to facilitate everyday life.

Abdelaal countered that providing services required entering into opposition-controlled areas and that this could lead to clashes.

Ladsous made his remarks as U.N. chief Ban Ki-moon warned that the search for peace in Syria was at a "pivotal moment" and as the violence across the Middle Eastern country claimed at least another 38 lives.

dear ladsous, the genocide of the syrian people have been going on for the last 14 months precisely to end peaceful protests and force the people into submission, are you joking lol? In due course even the UN observers will join the protests. Ma ra7 ydalilkun sa7ib ya regime.

B k-Moon should at the sametime ask for the release of thousands of Palestinians whom are in Israeli jails. Nothing about there release since he took over the GS stick. Shame on you B KI Kha2raa!