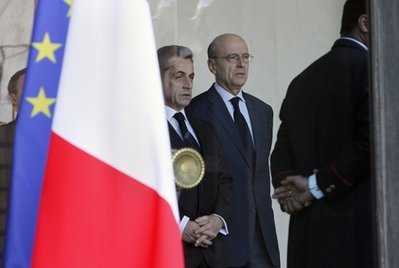 Several Arab nations are prepared to take part in a military operation in Libya to stop the advance of leader Moammar Gadhafi's forces, French Foreign Minister Alain Juppe wrote on his blog on Wednesday.

"Only the threat of force can stop Gadhafi. It is by bombarding, with the few dozen planes and helicopters he really has, his opponents' positions that the Libyan dictator has turned the balance.

"We can/could neutralize his airborne means by targeted strikes.

"That's what France and Britain have been proposing for two weeks. On two conditions: getting a mandate from the United Nations Security Council, the only source in international law for using force; acting not only with the support but also with the concrete participation of Arab nations.

"This second condition is in the process of being satisfied: several Arab countries have assured us that they would take part."

Juppe was writing after hosting his counterparts from the Group of Eight major powers on Monday and Tuesday.

The foreign ministers failed to agree on military intervention in Libya, notably a Franco-British plan to implement a no-fly zone to prevent Gadhafi's forced advancing on the rebel stronghold of Benghazi.

Instead the G8 agreed to send the issue of dealing with Gadhafi back to the U.N. Security Council in New York, where further action, including economic sanctions, could be authorized.

"France, with Britain and Lebanon, have just put forward a draft resolution in New York that would give us the expected mandate," Juppe wrote.

"The French president (Nicolas Sarkozy) and the British prime minister (David Cameron) have just called solemnly for the (U.N. Security) Council members to look at it and adopt it."

"It often happens in our recent history that the weakness of democracies gives dictators free rein. It's not too late to break with this rule."

Rebel forces in Benghazi, Libya's second city, were on Wednesday awaiting a threatened assault by forces loyal to Gadhafi, who has vowed to crush the month-old revolt against his rule.

He said the Arab League, which suspended Libya from participation and backed calls for a no-fly zone to prevent him from bombing rebels and civilians, was "finished".

Addressing Arab leaders, he said "it is you who should let your peoples live in freedom."

"I challenge them to give freedom to their peoples the way I have done with the Libyan people."