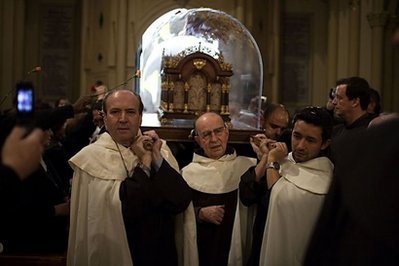 The relics of Saint Therese of Lisieux, a widely-revered 19th-century Roman Catholic nun, made a solemn entry into Jerusalem on Wednesday, the start of a tour of the Holy Land until May 31.

While the relics, fragments of the French saint's femur and foot bones, have been on a world tour for many years their arrival in Tel Aviv on Monday marked their first time in the land she longed to visit in life.

About 1,000 clerics, Catholic boy scouts and lay believers accompanied the wood and gold chest containing her remains in a procession through the walled Old City to the seat of Latin Patriarch Fuad Twal, who heads the Catholic church in Israel, the Palestinian territories, Jordan and Cyprus.

The relics of what Twal described as "the greatest saint of modern times" received an emotional welcome from the crowd, which included many Palestinian and Israeli Arab faithful.

Therese, born in Alencon, Normandy in 1873, entered the Carmelite convent at nearby Lisieux at the age of 15.

She died of tuberculosis aged 24 but not before writing "The Story of a Soul" which taught humility and said that a saintly life could be lived through small acts of love and devotion.

She wanted to visit the Holy Land and learn Hebrew and Greek so that she could study the scriptures in their original form.

"She took the land to her heart," Twal said. "She loved all the towns with which she was familiar through the bible."

Her remains will criss-cross Israel and the Palestinian territories, visiting Haifa, Acre, the Galilee, Bethlehem, the ancient town of Jericho and the Gaza Strip.

"We welcome little Therese with emotion," Twal said. "She who died at the age of 24 sends us on an exceptional path of love, bringing the peace of the heart to those whom she visits throughout the world."

That message, he added, was not solely for her devotees.

"We need a spiritual dimension to create unity between us Christians and also Jews and Muslims," he said.